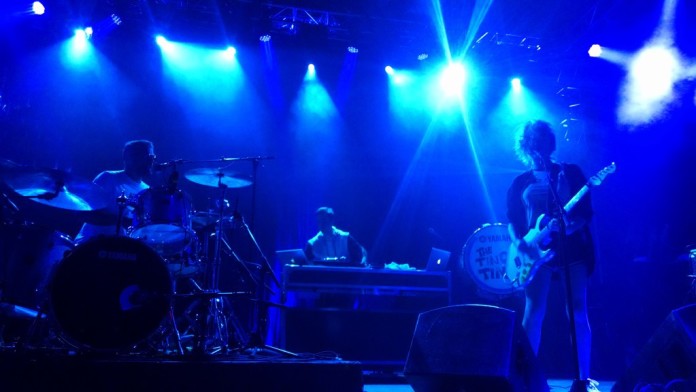 The night of April 23rd brought with it the British indie-pop duo called the Ting Tings and their much-anticipated show as they returned to the Granada Theater in support of their funk-inspired third album “Super Critical”.

You can always leave it to the Tings to bring along excellent opening acts, and this time it was no different. KANEHOLLER, who featured alternating female and male vocals, played a very memorable set that was marked by pure skill and passion. Occupying very little space on the stage, the duo didn’t need much besides their electronic-soul sound to immediately grab everyone’s attention. Reminiscent of bands like Wet and Halsey, the band’s seductive opening tracks turned heads, while their later songs were much heavier and more upbeat and contained traces of techno and dubstep. KANEHOLLER got the crowd moving and it was their set’s great flow that, in combination with the enthusiasm of the band members, made them seem not just as an opening band but as a headliner of their own.

Nothing can represent the Ting Tings’ show better than the “Good Vibes” phrase that was written on front-woman Katie White’s shirt. Playing an extensive set that encompassed all three albums, the band successfully delivered their cute and lively set from start to finish. The duo got to work right away with “Do It Again” and by playing hit singles “Shut Up And Let Me Go” and “Great DJ” early on. From the very beginning, the bubbly personalities of the band were made evident as Katie (vocals, guitar) strummed away on her guitar, often stepping up to the edge of the stage to excite the crowd. Jules De Martino (drums), on the other hand, contributed with his trademark sunglasses and perfect backing vocals. As is often the case with bands with more than two albums out, the Ting Tings’ set was mostly comprised of all their singles. They did, however, choose to focus more on their most recent release and all the funkiness that it brings along. This meant that while the band played “Fruit Machine” and “Hang It Up”, they chose to focus their firepower on creating a danceable atmosphere that resulted, for example, in a more stripped down version of “Give It Back”, which is perhaps the band’s most powerful tune.

In turn, these efforts saw the band pay more attention to newer songs, replacing the jam session during “Hit Me Down Sonny” that they played three years ago with a much more enthusiastic version of “Green Poison” that led into a massive electronic rendition of “Hands”. And of course, there was room for the crowd-favorite “That’s Not My Name”, but surprisingly, it didn’t close the show, and the Ting Tings ended with their newest single “Wrong Club” and a semi-acoustic version of “Super Critical”. As always, the Tings were nothing but fun, performing in a way that let everyone in the audience be themselves. Not all bands can do that, and the duo has their unique charisma to thank for allowing them to do it time after time.