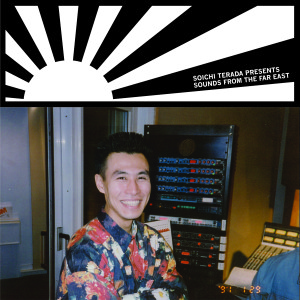 Sounds From The Far East compiles 12 tracks from video game music composer Soichi Terada, best known for his work as the composer of the Ape Escape video game series, and his friends Shinchiro Yokota and Manabu Nagayama. All of the tracks on the compilation were previously released in the early 1990s on Terada’s own Far East Recordings label. Whilst displaying a heavy influence from New York house maneuvers from the day, Sounds From The Far East sounds both of its time and beyond its time.

The top notch production values are very apparent in the percussion on the album. Good drums are a good aesthetic, and Sounds From The Far East has a great aesthetic. The drums hit in all the right places, managing to be catchy and driving without overpowering the melody that most songs incorporate. This is especially apparent on the tracks “Sun Showered” and “Low Tension (Alternate Mix)” which have laid back vibe, but because of the drums, totally bang. From album opener “Saturday Love Sunday” and its distorted vocal samples inter-playing with a driving techno drum pattern, to the delightful “CPM”, the compilation manages to stay fresh and varied, something that’s quite surprising on an album that pulls together music from artists that are so similar.

The feel of Terada’s later work for Ape Escape figures into the compilation with the track “Good Morning” which has a frantic melody and breakbeat’s that sounds not too dissimilar from something he’d make for the game. Even tracks that don’t sound like video game music on the compilation still have the fun and energy of them. Overall, Terada and his friends provide a unique vision of house well worth checking out and is great for both home listening and jacking the aux cord.