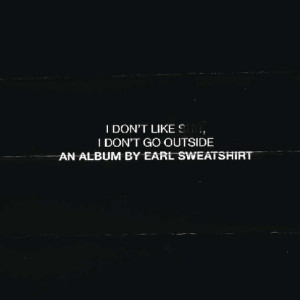 Earl Sweatshirt, in many ways, is the grumpy old man of the famed Odd Future rap collective. Despite the fun loving, sometimes immature and playful nature of their group, and Earl’s occasional contributions to this title, it’s apparent he’s grows weary of the clique like organization of the group and its lack of seriousness at times. This feeling of “growing up” is what powers Earl’s sophomore album to brilliance. Much like the interesting title plainly states, I Don’t Like Sh**, I Don’t Go Outside provides us a snapshot of Earl in his current phase, no longer the wide eyed prodigy that was shipped off to Samoa and dug up by Complex. The album shows an Earl Sweatshirt who is no longer surprised by the fame, but rather tortured by its lingering and provocative nature.  His debut album, 2013’s Doris, played with the subject, but had much more varied production with moments of tongue-in-cheek humor and vocal soul sampling. This new Earl has had his share of debauchery and fun from his wealth and fame, but is looking for something new to save him from it. This tension and pain sets up the recurring dialogue and thematic layering of the album.

The production on this album, almost entirely self-produced by Sweatshirt, is dark and despondent. Due to Earl producing the album himself, the pain and depression that is prevalent in his lyrics can also be ominously felt within the atmosphere of each instrumental. No longer following his former style of heavy wordplay, dicey delivery, and deft vocabulary, Earl trudges along each instrumental with a steady hand. Past the time for being a lyrical showoff, Earl poises each line and delivers it with emphasis and directness to get his point across on the beat. There’s no messing around here.  Earl rides the production of each song with a steady coast, almost as if he knows he can lyrically push harder on the album, but simply chooses not to due to the depressed nature of the album and his own psyche.

What saves Earl’s sophomore album from the doldrums is the fact that it’s brutally honest. Rather than sugarcoat or beat around the bush, the young lyricist puts his problems out on the world stage and gives listeners insight on his thought process for dealing with them. Whether or not you like it, the problems are pushed in your face and the cohesively dark production only makes their shadows loom larger. The lyrics of each song are at times so direct and unadulterated that it gives the vibe that the dialogue of the album is really just the pain and conflict of Earl’s mind.  Songs like “Grown Ups” show the melancholy of the album, as Earl sheds light on the void of not having a father present in his life, as well as the frustration it caused to build within him.

I Don’t Like Sh**, I Don’t Go Outside covers a range of interesting issues within society as well as Earl’s personal life. Earl puts the spotlight on: racism, the struggles of fame and wealth, growing up without a father, his frustration with OFWGKTA, depression, and media scrutiny; all with a depressed lyrical vengeance. In its entirety, Earl’s album is a twisted, dark, and honest commentary into the troubled and conflicted world of one of hip hop’s most hyped about and promising young lyricists.