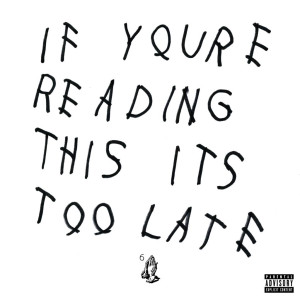 In the hours leading up to Valentine’s day weekend, and in the midst of Kanye West’s New York Fashion Week runway show and his Yeezy Boost release dominating timeline’s and news cycle’s around the globe, notorious purveyor of strip-clubs and honorary Houstonite by-way-of-Toronto Aubrey Graham decided to release a surprise project with an un-punctuated scribbling on its cover reading “IF YOURE READING THIS ITS TOO LATE”, briefly on Soundcloud for free, and after this was immediately taken down, on iTunes for $12.99. The project’s confusing designation as “originally a mixtape” (as mixtapes are generally free affairs), and then as a paid for album on iTunes sparked some internet rumors about Drake cleverly scheming to be released from his signing with Cash Money Records and label impresario Bryan “Birdman” Williams by completing his 4 album contract. The rumor was led even more credence by the recent falling out between Williams and the label’s artistic paterfamilias and Drake & Nicki Minaj’s (and quite a few other of the label’s artist’s) career steward, Lil Wayne. Wayne is now suing Birdman and YMCMB for a paltry sum of $51 million in unpaid royalties and restitution’s for him and his artists, and everyone else has stayed generally quiet about the whole debacle. That is until IF YOURE READING THIS ITS TOO LATE was plopped among the masses and Drake’s litany of enigmatic lines about not getting his checks and the dismissing of fake friends could be dissected syllable by syllable on Twitter. For all the speculation about who’s getting paid and the debates about if  “pulling a Beyoncé” for an album drop even has any agency anymore, it’s really a testament to Drake’s grasp on culture that people are still generally excited about the music and the content of the album.

Album opener Legend sets the tone for the first group of tracks, a sort of menagerie of booming bass and hi-hats mixed with the sparseness and elegant flourishes that are emblematic of Drake’s highly developed sound. Straight out rapping is rarer here, as high pitched shouting and aggressive hook’s like those found on Energy and Know Yourself are interpolated with Drake slurring more often, and speaking more in catchphrases and casual couplets. Lyrical content focuses on being inured with fame, money, and women, as well as the general come-up talk, and for the most part it’s pretty hype if sorely lacking in variety. The sound presented in this part is honed further with songs like No Tellin and Star 67 that balance the tough with the soft, and these stave off staleness with injections of soul and mid-song beat changes that Drake has been known to handle with tact and presence (just think of 0 to 100/The Catch Up or Days In the East). Two of the projects lowest points, Madonna and Now and Forever, present some interesting ideas but fall incredibly flat in execution, with the former being an almost darkly jaunt through nighttime Miami, and the latter being a vessel for an amateur witch-house Soundcloud producer that harkens back to Drake’s mixtape days, and not in any good way.

The middle section of the album has PARTYNEXTDOOR’s handwriting all over it, with a more dark R&B sound and song structure going on, not to mention PND taking precedence to Drake himself in many songs like Wednesday Night Interlude. The sole guest verse from a rapper, here in the form of Lil Wayne on Used To (also featured on Wayne’s mixtape sorry for the wait 2), also shows the chinks in the armor of the albums production and writing. However, Drake rapping about how he’s similar to a young Nick Cannon in Drumline and how he’s “Shaq postin’ up on niggas” that he “used to have posters of” makes up for every cringe-worthy line about Wayne requesting fellatio for an iPhone6.

The last 3 songs on the project take what is generally a middling experience and elevate this to something more. You & the 6 presents us with the honesty of lyrics that many have come to love from Drake, this time in the form of a conversation with his mother about relationships with the women in his life, the rap game, forgiving his absent father, and the validity of rumors spread through Google Alerts. In the same vein, album closer 6PM In New York is just Drake rattling off for upwards of 4 minutes on the same subjects he’s always broached, but with the freshness and honesty he’s always brought to it, directly recalling tracks like The Ride and Paris Morton Music 2, stream of consciousness notes that Drake generally likes to end his albums on. Jungle, sandwiched in-between the aforementioned tracks, is the most tender and lightweight of the album’s songs, recalling a soulful freedom of melody/harmony and song structure that the likes of Marvin Gaye and Stevie Wonder perfected in the 1970s. It’s a delight, and along with the last 2 minutes of No Tellin’, is the most transcendent moment on the album.

Whether it’s an album of throwaway tracks or a ploy to escape from an abusive record contract, IF YOURE READING THIS ITS TOO LATE seems to be an omen of something completely new that will occur on Drake’s 4th official album, Views from the 6. For every euphoric beat switch and stream of consciousness flow presented here, there’s a semi-baked trap influenced “almost banger” or a half-heartedly written verse or hook. And that’s ok. As with any journey, there will be missteps, but it’s pretty exciting seeing someone taking such big steps, in such big shoes, and up such enormous mountains. Let’s hope Drake reaches the top.