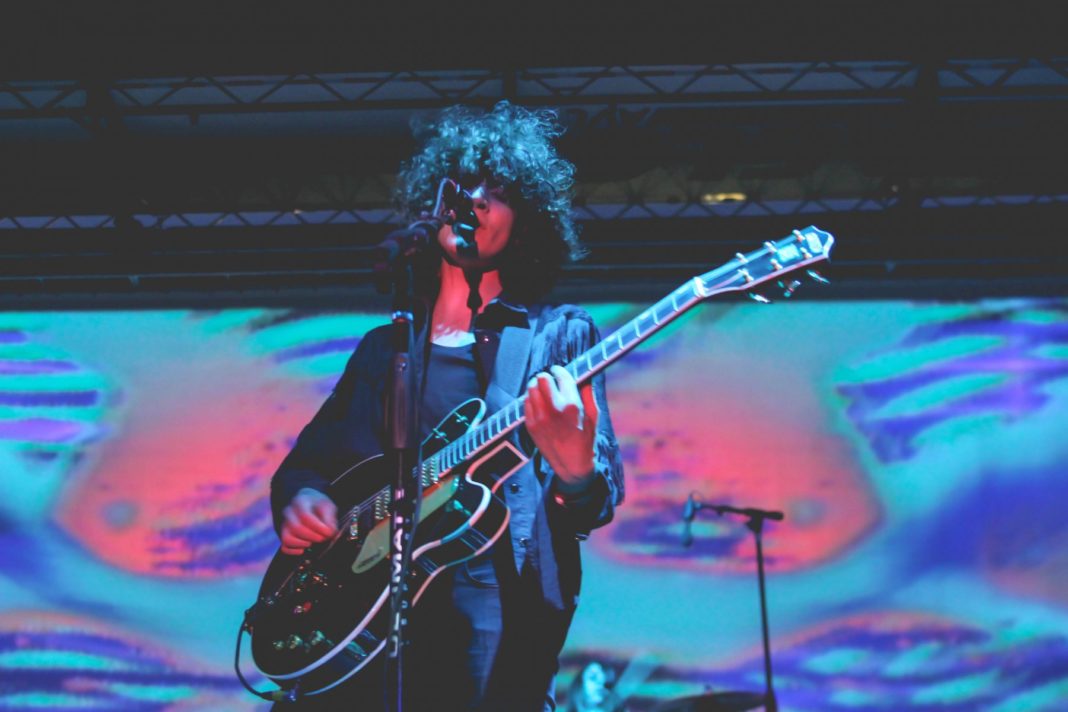 In case you missed it, you can read the first part of our Austin Psych Fest coverage here to catch up. Another Austin favorite, Octopus Project took the stage at 7:30pm inside the Levitation Tent. The band, definitely fitting for this year’s Austin Psych Fest lineup, had a very upbeat set. Their sound is best described as experimental and psychedelic pop. The outfit kept it upbeat from the first song to the very last song. Favorite part of their set? When band member Yvonne Lambert played her part in a couple of songs with her theremin. – Yazz After Friday night’s stacked list of notable performances from the likes of The Dandy Warhols, The Black Lips, Liars, and The Black Angels, the bar was set high for Saturday’s performing acts. And wow, did Temples deliver. The English psychedelic rock band took the main Reverberation at 8:15pm. It couldn’t have been a more perfect time slot for the band as the sun was also setting at this time. By the end of the set, the skies had darkened and the colors in their visuals caught the crowd by storm. Lead frontman, James Bagshaw, even commented to the crowd during the set that this was indeed the best festival they’ve played music-wise. And unlike any band who could say that but chill in the artist lounge all day instead, the band really did mean that. They were seen randomly from time to time rocking out among the crowd at other performances. Temples opened up with “Colours to Life.” With only having their one album, Sun Structures and being a band since 2012, they have created a lot of buzz. I wish much success to those dudes. Mainly because I can understand their words and that I appreciate.They also played favorites, “Shelter Song,” and “Mesmerise,” which got the crowd going. Overall, another top notch performance at this year’s Austin Psych Fest. While wondering the fest for the first two days, most of the buzz I had been hearing had been surrounding the Saturday evening performance from psychedelic post-punk band, The Horrors. The band came out like a buzz saw, slaying through songs like “Who Can Say” and “I Can See Through You” early in their Psych Fest set. The band shuffled between songs from their three most recent albums, but it was the tracks from Skyiing (2011) and Primary Colours (2009) that produced the most mind-bending sounds that warped all space and time during their set. The set ended with eight-minute epic, “Moving Further Away” while a kaleidoscope of colors projected on the screen behind them. It was a Horrors set that only moved us closer together. -Eric

The headlining set from The Brian Jonestown Massacre began and a note that captured the unique sense of community that characterizes the Austin Psych Festival experience. Alex Maas of Austin’s own, the Black Angels, playing somewhat of host duties, came out to thank everyone for coming out the fest and to introduce The Brian Jonestown Massacre. It was a great moment that capped off a wonderful day of amazing sets from incredible bands. This Brian Jonestown Massacre set demonstrated the band’s ability to blend 60’s psychedelia with the jangly garage pop sounds of the same decade. “Who?” and “Oh Lord” from 1996’s Take It From the Man, were great examples of latter, while the sensual and psychedelic Their Satanic Majesties’ Second Request centerpiece, “Anemone,” was the quintessential example of the former. If I had to characterize the sense of spirit and feeling I shared with everyone in the crowd that night I could probably just put on “Whoever You Are.” It captures it all. -Eric Unknown Mortal Orchestra took the stage promptly at 9:30pm following Temples. The switch from Temples to Unknown Mortal Orchestra was a definite contrast. So much, that I really thought it should’ve been the other way around. UMO first, and then Temples. However, Temples did have that sunset slot so I can’t really argue there. The crowd was just as welcoming as before with Temples. Although the drummer isn’t pictured above, the stage set up is usually one of my favorite set ups when watching bands perform. It was two performers on the right, and the drummer facing sideways on the left side. Cheering along when they played familiar tracks, “How Can You Luv Me,” “Ffunny Frends,” and “Thought Ballune.” Even though I found their performance to be slightly underwhelming, the trio brought the funky vibes. – Yazz