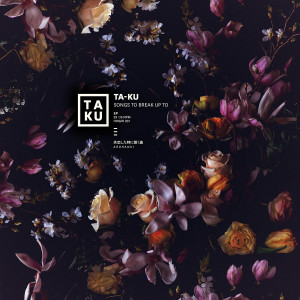 Let us admire the cover art. It is beautiful. Everything is congruent in color choice, tone and style, and that shouldn’t go unnoticed. If you look at it in perspective to the EP title, song names and the actual music, it is simply fitting. Ta-ku and his eye for aesthetic involved with both visual and musical art is an effort, but is his latest EP an actual triumph for the reception is has been receiving?

The latest music from Australian producer Ta-ku has gotten the attention of all 106,000+ of his fans and put them into a maelstrom. The sensual Songs to Break Up To EP is a “cinematic musical journey for the broken hearted,” as Ta-Ku himself put it; “a concept EP that would hopefully resonate with different people for different reasons.” It is easy to get lost in the sounds which consist of an overall down-tempo mixture of minor chords and textured beats. Soothing to say the least, Songs to Break Up To will either make you feel happy you have something to relate to or sad for the same reason. It’s actually pretty emotional.

A rather lengthy track list for an EP, the 10 song selection is ordered the same way one goes through the process of breaking up (go figure) but it works; probably better than organizing randomly. Selecting a few tracks that stand out is a little difficult because they are all about the same level of ambient noise and emotion. You can recognize Janet Jackson’s “Someone to Call My Lover” sampled in on “I Miss You More,” layered over a steady click, voices and a marching drum. At the end of the song the percussion switches to a chill lounge beat which is worth noticing. Other songs like “We Were in Love” and “Moving On” are the same, slow instrumentals that act more as transitions between tracks but are still necessary for the whole sound the EP tries to produce.

Once you finish the album, you will probably feel more relaxed. This is excellent rain-listening or nighttime-strolling music for sure. There is a finessed sense of consistency throughout the tunes and cover and Ta-Ku is obviously trying to convey some sort of message. The album has been hyped up a little much, both in its production and release, so try to go in listening with an open mind.