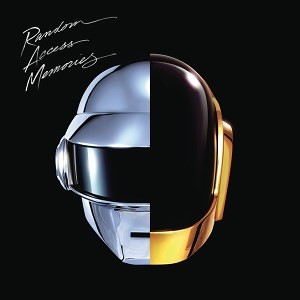 I believe it’s fair to say that from behind their metallic faces, Guy-Manuel de Homem-Christo and Thomas Bangalter have become massive icons of the great beast that has now become EDM. The Robots have said that they don’t listen to EDM themselves, and don’t like the association, so they created this album to be a game changer. Instead of riding the wave of previous albums, they threw out their computers and recruited the best studio-pop musical legends they could get and created an album using the sounds of the last strain of dance music that drove the whole world nuts: Disco.

From the very first track, it’s obvious that this album is not like any of its predecessors. On tracks like “Give Life Back to Music” and “Lose Yourself to Dance,” you can immediately notice the infectious guitar styling of the great Nile Rodgers, providing smooth riffs and a classic disco feel. Pharell’s vocals on these tracks seem to be mostly functional. That is nothing against his voice, but disco has always focused attention away from the singer and more on the producer. That is where Daft Punk shines. “Get Lucky” provides strong grooves and a memorable hook, while “Loose Yourself to Dance” is solid, it’s definitely the lesser of the two.

Songs like “Within,” “Beyond,” and “The Game of Love” provides very sensual and beautiful slow jams and ballads. These may not be the most-hard hitting, but this is where Daft Punk sounds closer to their previous albums. They all follow a standard Daft Punk recipe that dates back to Discovery, jagged bass lines, a slow groove, a large disco influence, guitars and synths adding some color, and the classic robot vocals singing up front, a very strong melody, a ballad, and lyrics about love. It’s on these tracks that the robots show off their lyrical prowess.  The track “Game of Love” is heartbreaking with its portrayal of dying love. “Within” connotes a sense of smallness in the huge, hard to understand world.  “Beyond” details a very passionate journey of a very sad and forlorn soul.

“Doin’ It Right” featuring Panda Bear works surprisingly well. Typically when Panda Bear is featured on a track, his vocals tend to over power the song and derail what ever was going on. On this track, his voice is more contained. It’s not necessarily the forefront of the track, but more like the icing on a beautiful musical cake. The track is layered with a deep bass, drums, synths, and robot vocals, leaving Panda Bear to provide the color.

The final song, “Contact,” is vintage Daft Punk. First used in a DJ set back in 2003, it has found it’s way into this album. This DJ Falcon colab is based on a single sample, pulling its rift form a 1981 song by the Aussies, The Shrubs. Listening to “Contact” is like having time collapse in you eardrum. It progressively layers more and more until you feel as if you can’t take anymore. Then it simply collapses into rising synths until it dies, like a dying star.

The most impressive song on the album is “Giorgio by Moroder.”  Moroder, being arguably one of the greatest producers in the world and disco genius, spend most of the song simply talking. My first listen, I was immediately put off. Then, when “but everybody calls me Giorgio” hits, the spine chilling pause before the Moroder sequence-burbles kick in, I finally understood. After this song keeps, with it’s jazzy sequences, and builds and builds, into this massive prog-rave opus. It’s like an ode to every Daft Punk influenced artist (ie Justice) but beats them at their own game. At first  I wondered how many times I could listen to Moroder tell me about sleeping in his car until I got sick of it. Now, it’s all I seemed to be listening to.

Random Access Memories isn’t just disco, it contains elements of soft rock, silky smooth jazz, wrapped together to become a cheesy Broadway rock album. This my make the album come off as silly, but that seems to be the wrong way of describing it. It definitely doesn’t take itself too seriously, but the word silly seems to imply that it’s sum sort of joke. The album tries to capture the heart of dance music itself. Dance music isn’t serious, it’s infectious, it’s smooth, and most of all, it’s fun.  In broad vision, and its rigorous no-expense-spared attention to detail, RAM is a truly breathtaking album.