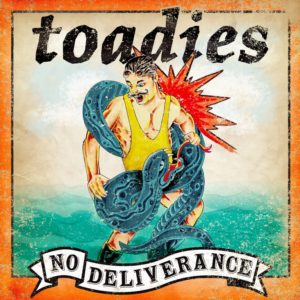 Its been almost eight long years since the last Toadies album. Since then, the alternative rock and punk genres have changed in many ways to fulfill the ever-hungry music population with originality and innovation. However, Toadies hasnt changed much at all; you still hear the stylistic alternative punk/post-grunge rock that flourished in the 90s.

This sound would feel a little annoying, and almost jaded, right? Wrong. This is a welcomed bit of nostalgia from a style of music that arguably never should have faded away in the first place. It brings back a style we all used to know and love: heavily distorted guitars, emotionally charged lyrics, and a rebellious feel that we all used to want to imitate. The biggest downfall of No Deliverance, however, is that its very repetitive. The opening track, “So Long Lovey Eyes”, sets the pace, tone, and style for the faster songs, and “I am a Man of Stone” does the same for the slower ones. If youre listening to the album straight through and not paying close attention, you may end up saying to yourself, Man this track is a long one or, I could swear I just listened to this a little while ago (The album being roughly 35 minutes in length doesnt help either).

Toadies only had a little success in their early attempts (only two CDs released before they first broke up), and it should be known that the tracks on this album are NOT like Possum Kingdom that many of us came to love, but they have never done any BAD music. No Deliverance certainly may not be the best 90s-sounding alternative punk/post-grunge rock album out there; this isnt to say, however, that it is the worst. Its decent. It shows a strong potential for future quality, and overall the tracks arent terrible. Toadies have put out quality work in the past; lets just consider this to be a decent attempt after a long eight year hiatus.

Bottom line: if you liked Toadies in the past or are still a stickler for 90s post-grunge and punk rock, youll welcome this addition to your library.