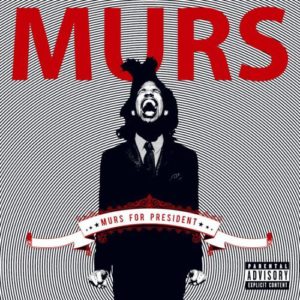 When people think of West Coast rappers many people think of N.W.A.(Dr. Dre, Easy E, Ice Cube), Ice T, Snoop, the Game, E-4 Oh yeah, and that one guy named Tupac Shakur. Needless to say these are tough acts to follow out West, and while many fans of the west coast style of hip hop are eagerly waiting for Dr. Dres new Detox album, underground legend Murs seems to give these fans of the left something to bob their head to in the meantime. Murs new release on Warner Brothers, entitled Murs for President, continues where his previous solo successes left off and solidifies his spot in the mainstream picture as one of the most talented West Coast rappers today.

For those that are unaware, Murs has been dropping solo albums since 1997. Some of his most recent and popular releases include In the Beginning, the 9th Wonder-produced album Murs 3:16 on Def Jux, and Murrays Revenge released in 2005. Now, the self proclaimed afro-punk rapper is back giving you more music with a major label release that features appearances by none other than Snoop Dogg and Will.I.Am of the Black Eyed Peas, 9th Wonder, James Blunt and more.

One of the first few songs on the album is the Will.I.Am.-produced track entitled Lookin Fly, which features a sample from the Green Hornet Theme. The hook of the song seems to have a lot of commercial appeal relative to some of the other projects Murs has released in the past, as he repeats that hes lookin fly to the sound of an ascending trumpet solo… Pretty hot actually. Many of Murs earlier albums with Living Legends and 3MG (Three Melancholy Gypsies) seem to have more of a gritty sound than this album; nevertheless this album shows growth, as well as a real take on the world today. Murs talks of his life touring on the road, the state of the hip hop game, love, living “Comfortable,” and the looming pressures of producing a good product for the record label. Speaking of, the song Comfortable has to be one of the smoothest songs on the album. It sort of gave me the feel of riding in the car with windows down on a sunny day bumping some Slum Village or J Dilla. Translation its Real Hip Hop.

Although he does feature production by some of the greats on here, the content can be repetitive and the choice of beats falls off on a few tracks, like the song Part of Me. I can see how it would appeal to fans of, say… Paramore, but it missed me. The punk side of Murs has always been an aspect of his music that comes out here or there. Maybe some will feel he is trying to reach a new audience with it, but if you know anything about Murs, you would know that it is his style to have few boundaries with his art.

Several songs are social critiques as Murs gives the listener an idea of what many working-class people are faced with everyday. Murs grew up in what he called the hood, but finds a more positive way to show his love for his humble beginnings. Its a very relevant album in that Murs gives listeners topics that are of imminent concern to the rap game and the world in which we all live. This album seems to have something for just about everyone. The music is very well-produced and is a step up from some of the darker and abstract sounds of his previous releases on Def Jux. The song Everything includes a sample from the James Blunt song, showing he isnt scared to step outside of the boundaries of what many people try to create or what they sample on their albums.

Overall the album is a noteworthy release from a very talented West Coast MC. His beats are extremely well-produced in that he picks out some great samples that are flipped by some of the games dopest producers (Nottz, Will.I.Am, 9th Wonder and Scoope Deville). Dope album, but Im still left looking forward to his next release. I want to see what he does next with Warner Brothers Records. I like the title Murs for President, but I dont see how that theme carries over throughout the album. Also, I have to give him credit for coming out with a release that has mainstream appeal, but that doesnt give in to pressures of promoting violent behavior, drug use and womanizing like many commercial releases today. I guess we will just have to see where the record label takes his music, because he is strong proponent of putting out music that has substance as opposed to music that can be degrading or hurtful to the hip hop community and its listeners. Judging by how good the Snoop song on this album sounds, I can only expect good things from Murs as he continues to grow into an underground artist that has crossover appeal to mainstream audiences.