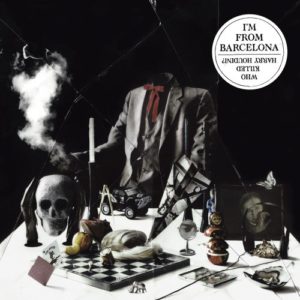 RiYL: Architecture in Helsinki, early Of Montreal, Saturday Looks Good to Me

This album makes me want to sit on the floor, put cartoons on the TV, and build things with Legos.

In I’m From Barcelona’s second album, singer Emanuel Lundgren and his 20+ friends that make up the band deliver wonderful melodies of love and play that had me humming for days after I listened to them. At one point, a xylophone chimes out a cheerful melody. Elsewhere, a banjo provides backup in a rock song that it normally wouldn’t have any place in. A large chorus joins in with the instruments and song, adding to the music the power of all its voices. And that’s all in one song.

Most of the songs in the album can be classified as playful, psychedelic, or some of both. The songs with a more playful side, such as “Paper Planes,” “Headphones,” and “Mingus,” sound something like Kimya Dawson (one of the main artists on the Juno soundtrack and a children’s song writer) would if she had an orchestra and whatever instruments her neighbors had lying around their houses in her music. The result is sublime.

The psychedelic side of the album, including the songs “Andy,” “Music Killed Me,” and “Gunhild,” feels almost like a modernized version of what is popularly known as “60’s hippie rock.” Populated by slow, haunting backup choruses, tambourines, pipe organs, and strange, foreign-sounding vibratos, the songs simultaneously calm and stimulate, relaxing the listener yet leaving them engaged and wanting more. Calming? Yes. Background music? Definitely not.

There’s definitely something to be said for the lyrics as well. Many of the songs seem to promote a return to childhood; the idea that if everybody took life just a little less seriously, we’d all be a lot happier. The theme is especially prevalent in “Mingus,” which conveys the need for seeking personal happiness in life, but portrays the difficulties in doing so at the same time. The only song that didn’t particularly delight with the lyrics was “Ophelia,” mostly the song only consists of two lines that are repeated in various manners. However, it’s a minor complaint for a great album.

Falling under the “combination of both” category, the last song on the album, “Rufus,” is a seven minute-long song about a giant silver Labrador that sounds like a combination of the works of Jethro Tull, Meatloaf, and Raffi. No, I can’t figure it out either. It does wrap up the album rather nicely, though.

Overall, Who Killed Harry Houdini? is a fantastic album, both innovative and enjoyable. The idea that one man can get 20 friends together and make such great music is awe-inspiring and uplifting, not to mention that the wide variety of instruments really adds something to the music. At the very least, go to their website and watch the music video for “Paper Planes.” It’s extremely hard to dislike.
– Harrison Massey