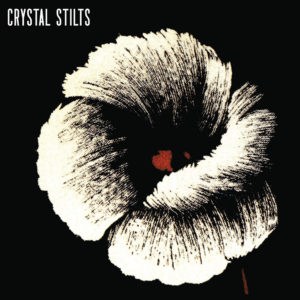 These guys haven’t changed much since their much-adored self-titled album besides possibly moving their equipment from a bathroom to a glass (errr… Crystal?) room; and by “equipment” I mean their instruments, their tape recorder and their reverb pedal (to get their insane amounts of reverb). In fact, five of the seven songs from Crystal Stilts also appear on Alight of Night in marginally less muddled form. The Brooklyn band is so assured in their stoic vocals and minimalist pop hooks that it’s easy to dismiss Alight of Night as a one-dimensional album, but the worst (and possibly easiest) thing you can do with this album is stop halfway through and say it all sounds the same.

Harsh cords, rolling bass, punchy percussion and brooding vocals are all definitive of Crystal Stilts’ work, and threaten to frame them as a less affective Joy Division (see “Departure,” previously “Converging in the Quiet”), but Crystal Stilts are able to go to many different places, if not higher heights at their most brilliant moments. “Crystal Stilts” makes a second appearance on this album, and appropriately so. Not that it was in much need of a makeover, but represents a distillation of their sound in one joyous, care-free fling. The revamped version was released a few months ago and became an instant Summer staple. They manage to approach a simple upbeat tune with a sense of apathy, or confusion… I’m not sure which exactly, but “Crystal Stilts” wonderfully illustrates their ability to spin familiar elements into something new and exciting. Not since “Big Country” has a self-titled song been so stylish!

“Prismatic Room” is equally brilliant. The band never really makes a point to be understood vocally, which works much in their favor as the hypnotizing rhythm and melody are established; catching lyrical snippets like “this magic room, my prismatic tomb,” and “this cosmic room, my caleidoscopic tomb” repeating on the same passive cadence is undeniably trance-inducing. The lyrics themselves aren’t nearly as important as the way they’re delivered. This vocal finesse is one of their greatest strengths throughout the album, and creates an extra dimension that expertly compensates for their seemingly limited palette of sounds.