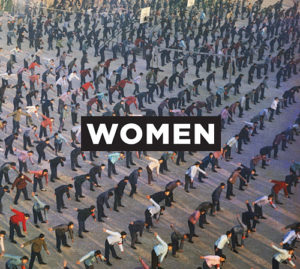 Ironically named, but notably talented all-male noise popsters, Women, haven’t had the benefit/burden of the levels of hype that seem to precede the coming out party of every band still feeling the afterglow of an alluring high school talent show victory. The lack of unreachably high expectations facing this excellent album truly allows it to stand out on its own, a seeming weakness that is readily transformed into a highpoint, a breath of fresh air that is, most importantly, not to be easily defined. The astoundingly varied influences, new and old, on this album are interposed together to create something original on its own terms.

First released on Canadian micro-indie label Flemish Eye in early July, the debut album by Women is set for a stateside release this October on the well-known label Jagjaguwar (Okkervil River, Bon Iver, Sunset Rubdown!). Archaically recorded over four months in Calgary “on ghettoblasters and old tape machines in Chad VanGaalen’s basement, an outdoor culvert and a crawlspace”, it makes sense that this album carries an aesthetically lo-fi feeling as well as it does. However, the level of coherence and order Women are capable of maintain amidst so much noise and dissonance is particularly striking. It would not be a far guess to attribute this congruence to the fact that all four band members are friends from childhood, two of them brothers.

More than anything else that this album does well, and there is plenty, is the degree to which Women have been able to merge old with new. From the noisy proto-punk of a Lou Reed-driven Velvet Underground, jangly slowed-down Beach Boys melodies, and the experimental inventiveness of This Heat, to elements of modern contemporaries; Animal Collective, Deerhoof, No Age, and, most apparently in tracks on the second half of the album, influential noise-rockers, Liars.

In the end there are really too many genre-slashes to put any kind of definitive label or description onto the type of music Women are in the habit of putting together. This is a good thing.