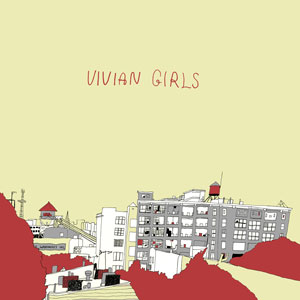 After hours listening to the self titled first release of Brooklyns Vivian Girls I still couldnt place what I was hearing. As an aside  listening to it for hours is saying something, not because it isnt terrific, because it is all of that, but mostly because it is only 25 minutes long! Anyway, placing itthat was hard. As a long time fan of shoegaze it was easy for me to hear connections between Vivian Girls and some of my old mid-eighties favorites from the Charlottes to Pale Saint. And sure, one can hear the Raincoats as an influence in the bands punkish, garage noise as well as hints of the early 90s DC acts like Tsunami and Lovechild. But ugh, references aside Vivian Girls spin something new, if a bit familiar.

The trio of women (Cassie Ramone, Kickball Katy, and Ali Koehler) harmonize, pound, thump and dangle in your head. These are noisy songs you can hum with just enough clearly defined melody to tie together what might otherwise have descended into sonic chaos. At their most frantic moments you can almost feel the urge to fly off the tracks just barely contained in the songs short bursts of energy. “Tell the World” and “No” capture that energy best. “No” is a perfect 1:20 of utter negation set to a crashing backdrop of snares and tinny reverb. Its the noise you hear in your head when you just cant take it anymore, a soundtrack for the shock of something that has to be told to stop! “Wild Eyes” and “Where do you Run to”, show more restraint, offering catchy guitar work and reminding you of the innocence and oddity that are suggested by the bands name, which is a reference to recurring school girl characters in Henry Dargers opus Realms of the Unreal.

The Vivian Girls, like their name sake from Dargers paintings, are fragile but scary. Sketched in water color and pencil they look innocent and angelic, but hearken a sense of dread and chaos. Brooklyns Vivian Girls create the same kind of dissonance and beauty. Pick this album up. Play it often. Let yourself be confused and delighted by its contradictions and nuance. I did.