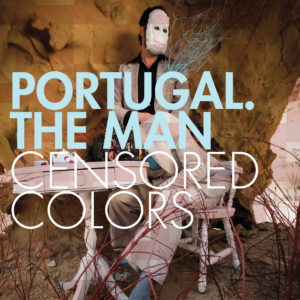 The old adage, The only constant is change, rings especially true for Portugal. The Man, who prove time and again that they cant stick to one sound for too long. On their latest album, Censored Colors, their third in as many years, the band members reaffirm their powers of mutability and completely reinvent themselves for the third time in as many years. Their 2006 debut record, Waiter: You Vultures! screams of a slightly less cocaine-fueled Mars Volta. Dont be confused however, even minus the cocaine, it was a complete rocker from start to finish. Their follow up, Church Mouth, while still extremely high energy and fast paced, had a much lighter air about it, and truly showcased the level of maturity they gained as musicians between recordings. The songs seemed to shed not only the dark tone of the first album, but also much of the frills and over-the-top-instrumentation, each track more focused and more stripped down.

Once again, the band has truly redefined their music on this latest release, and even more drastically than between the first two records, almost making an about face in their musical direction. The writing is clearly their own; each song unmistakably a Portugal creation. However, theyve never done anything like this before. They never even hinted they wanted to take such a mellow course. In fact, the speed of the album is its most striking aspect. Theyve slowed everything down to a screeching halt compared to the tempo of their previous work. Most of the songs laze along slowly, heavy with sound, rarely increasing pulse-rates or blood-pressure. Of course, a few of the 15 tracks get the listener pumped, but overall the music encourages more of a light tapping of the feet induced by saloon style piano solos, acoustic guitars, and whimsical vocal harmonies.

Additionally, the album is wrought with a broader degree of musical influence, something their last albums lacked. The general feel is that they are trying to recapture the greatness of classic rock, while putting their own modern spin on it. The opening track sounds like something straight off of one of Pink Floyds earliest albums, Meddle, while the last track sounds reminiscent of Led Zeppelins off the wall tribute to Reggae, Dyer Maker. In between, the band seems to have drawn inspiration from John Lennon himself, with a few moments eliciting flashbacks to Jealous Guy, and I Dont Want to Be a Soldier, Mama. The album is even set up like Abbey Road, with the first half a set of independent songs, while the last half of the album is one cohesive unit broken down into individual parts. (The band goes so far as to make reference to themselves as rubber souls!) More still, the album boasts Mars Volta type complexity, as well as theatrics seen most recently by bands like The Killers and The Walkmen. The diversity of this album is undoubtedly its greatest accomplishment, as it allows for a very dynamic listening experience interesting from start to finish, and increases its overall replay value. I literally listened to it three times in a row the first time I put it in the CD player, and came nowhere close to bored.

To be sure, the album takes a little getting used to. It is just such a departure from anything the band has done that it left me a little shocked at first. But after a few listens, the shock gave way to complacency, and eventually sheer delight. The songs, while certainly not mainstream, maintain just enough catchiness to get stuck in the listeners head, but are all good enough that humming them all day is a welcome burden.

This is one of those albums that just grows on you. Not more than a few hours ago, I was discussing my thoughts on Censored Colors to a fellow D.J., and concluded that the album, though good, left no real impression on me. I said its the kind of music that Im happy to listen to if it happens to be on, but I cant see myself going out of my way to put it on. Yet by the time I got home I was itching to hear it, and I popped it right in the stereo the moment I stepped through the door.

Portugal. The Man has succeeded where many bands fall short: they have stepped out on a limb with their music and managed to create something completely new which doesnt alienate their previous fans, but surely wont prevent them from picking up a few more along the way. Any current fans should enjoy Censored Colors so long as they know to expect something out of the vein of their first two albums, and anyone unfamiliar with Portugal. The Man should have no trouble latching onto this album, which is both accessible and enjoyable.