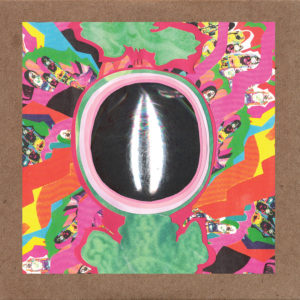 It’s hard to tell at first listen whether or not Crystal Antlers have any idea what they’re doing. Their debut EP is one of the most jarringly dense and unpredictable listens I’ve had in some time. EP is like a furiously-crafted patchwork made from the dried skins of lo-fi punk, funk, prog, psych, grunge and classic guitar rock that’s dowsed in gasoline and set ablaze to be used in some disturbing post-apocalyptic vengeful murder scene, like Mad Max or something. It’s immediately engaging for it, but demands your repeated listens at close attention to formulate any semblance of understanding. At the same time, it’s staggering that this bastardization of style can be used so effectively and consistently to create a distinct sound.

I had the pleasure of seeing these guys live before hearing their EP, and was blown away not only by their energy, but also the intricacy of the instrumentation. It looked like six guys pounding out some notes, but came off aurally as possibly the most calculated show of the sort I’ve seen. The bassist and singer, Jonny Bell, delivers blasts of vocals and dark arpeggios that give songs incredible drive while the keyboardist, guitarist and dual percussionists flesh out the sound. On EP, you really get a sense for this precision, but not nearly so much the energy. The disc still creates some punch-the-steering-wheel-intense moments, but a show like theirs is really just a set-up for a let-down.

My favorite song on EP, for its intensity, is the closer “Parting Song for the Torn Sky”. The bass produces a steady riff that all the other instruments swirl around and eventually consume, like an audible conflagration of drums, guitar, and intense noise. Jonny Bell then raises the bar and belts some of the most intense, distant, and desperate brain-melting vocals that I’ve ever heard, and that I know he’s capable of. The whole thing takes a seemingly economical seven minutes to burn to the ground and blow away in a desert breeze.

It’s not an easy thing to get into, and probably not the friendliest thing to send out on the radio waves, but Crystal Antlers’ music is worth your time. You’ll just have to let them drag you around by the ankle in high-tensile steel handcuffs for a while before you realize it.