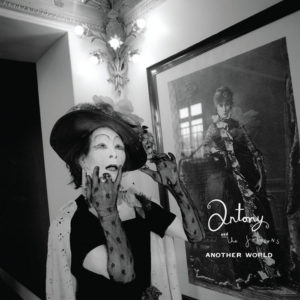 The five song Another World EP, which is an exciting taste of what’s to come on The Crying Light in 2009, unfolds with the kind of elegiac sentiment one would expect from Antony Hegarty. However, its complexity calls for some careful listening and patience, even from a devoted fan like me. I would not recommend this as an introduction to Antony. Instead, first go swoon over his cover of Cohen’s “If It Be Your Will” or the ballads from I Am A Bird Now. Then, definitely come back to Another World for the unraveling of a surreal landscape of floods, garden walls, caves, and mountains.

The title track is the opener and sets a tone of longing, which serves as the emotional backdrop for the whole EP. In a world that’s disappearing, Antony sings of being caught between his love for the most basic elements of nature and his need for a new place. The theme of shifting into an unknown space or future is one that Antony has touched on in his previous work (think: “Hope There’s Someone”). In this instance, he uses simple imagery in his lyrics to list the things he’ll miss: “bees,” “sound,” “things that grow.” In doing so, he brilliantly evokes both a childlike appreciation of the present and the innocent fear of “another world.”

“Shake That Devil,” is an odd gem nestled between piano songs that highlight the singular beauty of Antony’s voice: at once haunting, soothing, quietly uncomfortable, and full of strength. A hushed tone begins the song, and as it crescendos into a distorted drone, Antony transitions from a slightly timid and nervous a cappella into a jazzy spiritual that confidently cleanses demons and satisfies.

The structure of “Crackagen” calls to mind the storytelling cadences and transitions found in Joanna Newsom’s epic, Ys, while “Sing for Me” cleverly moves like a dirge that halts after every few stepslisten carefully in this one for some delightful recorder-type flute sounds that enhance its fairy-tale qualities.

“Hope Mountain” concludes the EP with bell twinkles and echoing whispers. Like “scores of soaring eagles,” mid way through, Antony’s voice circles upwards in lush layers sure to make all sensitive heartstrings quiver. Though he tempers the first set of trumpet calls with a lamenting piano, the final trumpeting is allowed to reign victorious, leaving us with sounds that repair sorrow.

Remember, this collection of work may take a couple of listens before its magic sinks into your heart; the reward is well worth your persistence and concentration.