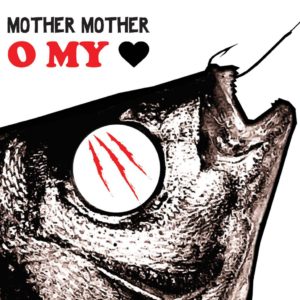 O My Heart, the sophomore album from Vancouver-based Mother Mother, is a supremely catchy album dressed loosely in an indie rock garb. Under the covers of the genre, however, the album contains roots in rock, folk, blues, pop, and big band music.

Kicking it off with the title track, “O My Heart”, Mother Mother psychs the ear with a White Stripes-esque, Von Bondies-like foray into tasty riffs and punctuated delivery: each element of the music intertwines, making for a powerful opening track that sets the tone – but not the style – of the rest of the album. The following tracks cover a wide range of influences, including Belle and Sebastian, Final Fantasy, M.I.A., and early Jenny Lewis with guts.

By far, the most powerful element of the album is the vocal delivery and potent lyrics. Every song has its own poetic, catchy hook, and it will snare you irrevocably with its rhythm. The brother/sister combo of Ryan and Molly Guldemond sing in a delightfully infectious manner; at times, the vocals turn into a chant-like refrain, at others, they’re soulful, semi-regretful prose spouting from the mic; Always, though, they are satisfying to listen to and entirely worth your ears’ effort.

Mother Mother is certainly an band to follow, and O My Heart is definitely an album to pick up. It is subtle, it is catchy, and it is quality: above all, it is worth listening to.