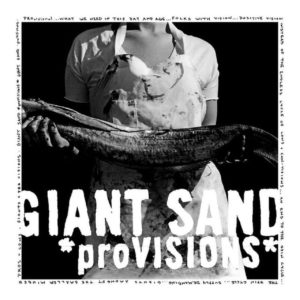 I hate starting off any recommendation for a cd with saying OMG IT WAS AWESOME, but honestly, proVISIONS was honestly one of the best new things Ive heard in a while. Simply said: if youve never heard of Giant Sand before, pay attention to this review because now would be a good time to check them out.<!–more–>

First off: if you ever thought that poetry in music was dead, think again. Howe Gelb (front-man of Giant Sand) was able to put together a sound for this CD that gives the listener the feeling of actually being in a dark, smokey underground night club from the 60s where poetry is read and music is played for sheer entertainment. His lyrics always seem to flow from one verse to the next perfectly. Knowing the large catalog of music Gelb has produced, its no shock that he was able to use his instruments to establish the mood of the album. Ranging from acoustic guitars, a dusty old piano, and even trumpets, Gelb truly creates an atmosphere the listener can be lost in. Each instrument has its perfect place. The good of proVISIONS? It delivers. He sings about love and loss, and there are some even some slight political undertones if you can catch them. The southern twist he puts on the music is definitely a force to be reckoned with. Point being youll feel something down in the cockles of your heart when you listen to this, maybe even the sub-cockle area.

The bad? Its almost TOO mellow. About half of the CD moves very slow, and even the songs that have a little bit of action to them arent enough to give you a break from the mood that has already been established. Overall? I cant recommend this CD high enough. I absolutely loved the atmosphere that was generated. proVISIONS was released on September 2nd, so if you get a chance, do the right thing and check them out.