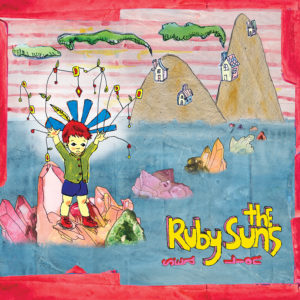 The element of surprise is one of the best things Sea Lion has going for it. Pleasant surprise. When I first picked it out of the pile of potential adds a few Mondays ago, I thought it looked pretty stupid. The colorful, amateurish-looking cover and the track names like Blue Penguin and Kenya Dig It? gave the impression that this band has fun with what they do, whether or not they really know what it is theyre doing.

Yeah, I was wrong. Ryan McPhun and the Ruby Suns definitely know what theyre doing. Not only that, but once the drum beats hit, and the elephant-like trumpet sounds off in the first two minutes, you know that they also know how to have fun. A huge surprise.

Its surprising to me because the Ruby Suns seem truly gifted in creating appropriate textures and intoxicating melodies, and have structured this album to showcase both without overindulging in either. This may seem like a simple statement, and you may not share my surprise, but very few artists are able to keep a consistently creative view in one aspect without losing focus on the other. The Ruby Suns dont believe pop music should sound like versechorusversedrumskeyboardguitar.

The melodies in Sea Lion are thick and gorgeous, summoning images varying from a tropical beachside party in Oh, Mojave and Tane Mahuta, to a reflective solo jaunt under the stars in Remember. The melodies never stay in one place for too long, but the changes never seem out of place, making this album enjoyable from the first listen on.

Despite my adoration for this album, I do have my criticisms. Although the melodies are constantly changing, the vocals tend to stay in the same range, pitch and energy-wise. The ever-surprising melodies and sounds continually run circles around them. They dont exactly stagnate, but they usually fail to reach an emotional climax. One exception is the second half of Kenya Dig It? Ryan McPhun takes on two roles at this point: a distant character crying out, and a proximal foil, giving short retorts that seem almost apathetic. The resulting little boost of emotional charge makes this the strongest song on the album, in my opinion. On the other hand, I fear for the longevity of the other songs; that little attribute is one that separates a really good album from an obsession-worthy one.

After hearing Sea Lion a few times, I started to realize how impressively cohesive it is. The cover and titles went from seeming stupid to necessary. I can definitely see this album being a strong contender on my year-end lists.

Oh yeah, and the last three minutes on the album sound just like New Order or Tears for Fears. Surprise!