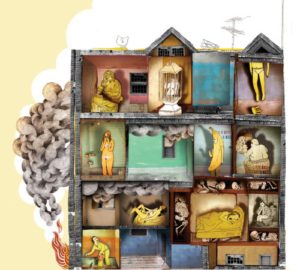 Excitement flowed through me (much like electric light flows through one of those fake backlit waterfall paintings sold at the mall) as I got ready to sit down and listen to Rabbit Habits. One of the best moments of last summer was listening to “Van Helsing Boombox” from Man Man’s sophomore release Six Demon Bag on repeat while driving around looking for burritos. I had similar expectations for this album, and already pictured myself practicing my best Tom Waits voice while hungry for beans and tortillas. As the first track played, I thought my waterfall was going to overflow. The best moment of this album comes to life on the opening track, “Mister Jung Stuffed.” There is a mix of raw tribal-drum energy, an omnipresent Tom Waits scrawl and a B-52s esque girly choir echoing alongside–which, I must add, is a good addition to any good god-fearing song. <!–more–>

Starry-eyed, I felt my skin tingle as track two came into view…but…it was not to be. Disappointment. Sheer, beautiful disappointment. Though the change of label from Ace Fu to Anti marks a good step forward for Man Man, I still feel like they have to push their talent ”to the next level!”. The moments when Man Man is good, they’re great. I mean it… truly great. This band has a few songs that are obnoxiously near rough perfection; some combinations of rhythm, vocals and lewdness that make me want to, ahem, sleep for weeks like a dog at their feet. Though all of their songs make for a really nice <a href=”http://radio.utdallas.edu/blog/?p=36″>live show</a>, and though I would consider this their most cohesive effort to date, I want to see Man Man step away from borrowing and make their way into the originality I know they’re capable of. Please don’t bore us, Man Man. We love you too much.

I’m okay with the constant Tom Waits fanzine treatment–that’s not the problem. They do it marginally well. What bothers me, I can’t specifically pinpoint…but I think it’s the overdoing of the theatricality of the music, pushing it to an almost Dresden Dolls (heaven forbid) level. In their most understated moments is where they are most successful; you can still see the vaudeville-in-a-dark-alley angle, you can still see the dirty unpolished speakeasy demeanor, but it clicks so nicely when you’re not shoved into it. Listening to the last track, Whalebones, is a lose-yourself-in-the-late-night experience. Track nine, El Azteca, is a Man Man meets drum machine and Dan Deacon lyrics fit of dance. And what makes both these tracks so enjoyable is exactly the understated unifying trademarked Man Man sleaziness.

My mind might change on subsequent listens, because I do not underestimate that Man Man charm. But at a first glance is when everything is clearer; and this is my final word. In this third release, Man Man has found a good direction to travel in. My guess is they still have a few albums to go before they unify everything that makes them great…or a few albums to completely become an act that can only be enjoyable live, which is not a necessarily bad thing.