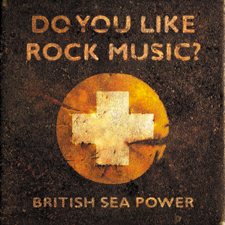 With their third and most profound release yet, British Sea Power asks us, Do You Like Rock Music? The resounding answer from this band’s strong following is yes! These Brighton-based fellows have created and reinforced their own rock sound that surrounds you with sweeping and epic guitar sounds and pounding drums. Often compared to Joy Division, The Cure, or the Pixies, British Sea Power does not disappoint with their latest release and has made itself the first essential rock album of 2008.

Opening with “All in It” British Sea Power dabbles with church-like organs and violin sequences to create a sumptuous and rich sound no doubt influenced by former Arcade Fire drummer. The Canadian impact doesn’t end there and “No Need To Cry” has a soft and flowing feel very similar to Broken Social Scene. Possibly the most moving song on the album, in more ways than one, is “Waving Flags”. With resonating and sweeping guitars that swell in concert with Scott Wilkinson on vocals, British Sea Power takes on an Editors type feel. Appropriately enough, the song is about welcoming in Eastern European Immigrants to the foggy shores of the United Kingdom.

After this album saturates your life for fifty-four and a half minutes you wonder why you aren’t already a British Sea Power fanatic, also called the Third Battalion. Though completely blasphemous on our side of the pond, alligience to this intense group will come as naturally as the stirring sound that British Sea Power fashions.