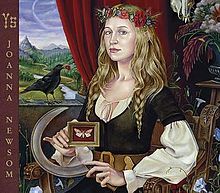 This is, literally, the most overrated piece of garbage that I have ever come across in my entire life. I mean, Im always excited to hear something new, but this doesnt even seem new to me; Ive heard harps and violins before, and Im a moderately large fan of Bjork. If you put the two together, you pretty much get this album.
Actually, I even used to like Joanna Newsom a little bit, back when she came off as a lighthearted folksy pop singer; back when she wrote melodies. She used to be cute and quirky, and her songs were simple and catchy. Now she takes herself way too seriously and writes songs that are long, haughty, and meandering; not even remotely memorable. All I remember is that she sung about a meteorite or something for like twelve minutes, which I was totally over, and then sung about a monkey thats in love with a bear for the following ten or so. Complete crap. Shes totally ripping off Bjorks shtick too, by the way, in case youre an idiot and didnt notice. If you dont think so, just listen to the beginning of Cosmia. Its totally a Bjork song, except, nobody cares, because Bjork already did that, but weirder, and better.
Even if I did like this album, I would never have time to listen to it. It seems like a terrible album for the car, which is where I spend the most time listening to music. I mean, I only live a few minutes from everywhere I go. I could probably drive to school, the grocery store, and back to my apartment before reaching the end of Only Skin, which is the only interesting part of the album, by the way, and only because Bill Callahans voice waters down Joanna Newsoms ass-cramp inducing squeals. Im not going to listen to this album when Im on a treadmill, and Im definitely not about to set aside a full hour so that I can listen to only five songs that annoy the sh*% out of me when I could easily listen to more than a dozen songs that totally kick Joanna Newsoms weirdo, elf-loving ass.
I just cant get over the overly grandiose, hyper-theatrical nature of the whole thing But of course the sound quality is amazing! Its Drag City! Shes totally sleeping with Bill Callahan, by the way. In fact, this album is a veritable cluster-$@*# of talent. Steve Albini is arguably the greatest producer that ever lived. All analog, too. This is just the kind of thing he would do as a joke. He’s a pretty funny guy, by the way. He recorded her nasty, insistent, phlegm-gargly voice, making it sound as tolerable as possible, and when he was done, Jim ORourke mixed it to attempt to make it even more so. He mixes for Wilco and plays with Sonic Youth. Those are pretty much the worlds two best bands. But, alas, their combined talents weren’t good enough. Also, by the way, Van Dyke Parks is amazing. In case you didnt know, hes a mind-blowing composer that contributed to the record, probably because she’s sleeping with him too. He even worked with the Beach Boys, back in the day. It seems like the only things that I like about this album have nothing to do with Joanna herself, which totally pisses me off, since shes the one that takes all the credit.
This is just one of those albums that I know Ill always hate.

Recommended Tracks: All
RiYL: Vashti Bunyan, Devendra Banhart, and not really Bjork at all

Joanna Newsom’s Ys is one of maybe a handful of artistic masterpieces I will recognize in my lifetime. Most people I know (probably you) would still agree with the first review, at least in part. Its a shame, but there are many arguments to make against the record, many of them perfectly valid (bedroom politics aside. I just threw that in because its an actual argument Ive heard a few too many times). I hated this record to death at first, and I was a huge fan of Milk-Eyed Mender. Had I written this a year ago, I may have written the former review with the utmost sincerity. But now, after a turbulent year-long relationship with the record, I can’t imagine a single way to improve it. I have to give it a 10. I would hate myself if I didn’t.
If I had to choose one word to describe this album during the first few listens, it would be CUMBERSOME. The songs are utterly huge in every assessable dimension. The songs are long and seem to meander endlessly, each song averaging roughly three times the length of her older, more conventional songs. Not only that, but she has a huge vocabulary of evocative words that shes definitely not afraid to use. And not only that, but its impossible to predict a single rhyme within the beautifully elaborate song-structure. Just for fun, I word-counted the lyrics for the 5 songs in Ys and got a whopping 3,681 (for comparison, the leading review boasts just over 500).
The most jarring thing for me; Ys was absolutely not the next logical step for Joanna Newsom as a songwriter. She used to be cute, and let her simple harp melodies act as the backbone of her songs, instead of a subtle garnish to accent her freakish (in a good way) voice. With the exception of Sawdust and Diamonds (in its entirety), there are only a few moments in Ys when her harp playing truly makes it to the foreground. Mostly Im talking about the last three-ish minutes of Monkey & Bear, the last forty seconds of Cosmia, and certain transitions throughout Only Skin. Even so, theres no real tradeoff between her vocal and harp melodies like there was in the Milk Eyed Mender; her newly plucky vocals dominate the better part of every track. Thats not to say that the harp playing is unimpressive or boring (its amazing), its just one more thing you have to take your time in appreciating.
In order for Ys to be enjoyable, you need to familiarize yourself with it, and be able to anticipate its dispositions and dynamics. It simply won’t make sense if you only spin it once or twice. I fear that too many indie kids will claim to hate it after doing just that; dismissing it as not to waste time in creating their bottomless store of music knowledge; valuing quantity over quality; likening the music industry to some fast-food enterprise; you get the point.
The meandering, cumbersome qualities of the songs that you may despise now will do wonders for the songs longevity once you get to know them. Moreover, as far as the ostensibly inane word-count comment is concerned, I feel safe saying that I think there are few, if any, modern songwriters that are able to say more in so many words. The albums content is infinitely dense, albeit almost imperceptible and dizzying without some context as a foothold.
Take your time with this one. Youll be glad you did.
-Stuart McAfee