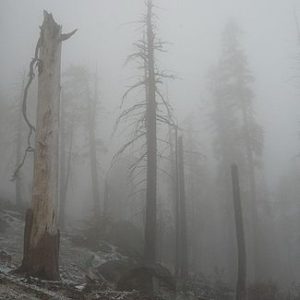 Recommended Tracks: A, B

RIYL: The Microphones, Thanksgiving What? Where did this come from?

I hadnt heard anything about this fine product until it had appeared before me at the record store. I suppose that Phil Elverums new(ish) label, P.W. Elverum & Sun, uses cult follower-hearsay to peddle wares in the place of mainstream promotion. I also suppose that this works, because the label still exists just as much now as it did at its creation, no more and no less.

The website is and has always been about what youd expect a Phil Elverum website to be: A plain white page with a hand-painted header and absolutely no flashy or useful links to categorize its information. Every once in a while there will be an attractive photo or some intensely droll image that you know Phil must have laughed at for half an hour. You just have to stick with it and scroll down until you get what you need. The point Im trying to make is that, when you scroll through it, you just know he mails handmade albums out that back of a little white cottage on the edge of a forest out in Washington. The aesthetics of the website carries with it more information about Phil than the actual information published on the website. How a website has this effect, I couldnt tell you.

Thats just this sort of thing that I absolutely love about Phil. You never know what to expect out of Phils work, but you know its his work when you see it. Everything that he creates is deeply human; his music shows no trace of digital cleanup just as his photographs and paintings glow with well-embraced simplicity. No matter what medium, Phils art always has the same atmosphere that exists through an absence of pretense, an attention to detail, and a willingness to give himself completely with every piece of work.

Now to the real point, I guess. The reason this is such a great little artifact (to me) is that its an incredibly high-quality product, worthy of any coffee table, but it still carries with it that simplicity and handmade feel that you and I both love. Phil even made sure that it was printed in as environmentally friendly a manner as possible, and gave some overall figures on the benefits of doing so (20 full grown trees, 60 lbs of water-borne waste, 9000 lbs solid waste, 1000 gallons of water, 1900 lbs of greenhouse gases, and 14870 (000) BTUs of energy were saved, according to pwelverumandsun.com). The book contains 132 pages of beautiful matte finish photographs from around the world and a 10 vinyl picture-disc. You can preview some thumbnail photos and get some supplemental info here.

The reason I havent gotten on to the music yet is that theres almost no point. You probably already know what his music is like. And besides, anyone willing to obtain the music on this 10 legally will absolutely love it. Its a breathtaking example of Phils outstanding analog production skills that will undoubtedly make your adrenaline flow. Being a continuation of Mount Eerie, you have a general idea of what to expect out of this disc. The songs are long and droning; wandering from abstract to melodic and back again. The vocals take on that Adrian Orange-esque quality that distinguishes his pre-Mount Eerie work from his post-. The narrative is vague and seems to have been intended to create a new context for the original Mount Eerie rather than provide something completely new; something that Phil is well known for. What I got was: Side A describes him waking up at home and reattaching himself to the waking world, however reluctantly, and Side B describes Phils revisiting of Mount Eerie in abandonment of this waking world where he finds everything to be too comfortable.

The book/10 package costs a considerable $70, but is a must-own for anyone who is serious about collecting Microphones/Mount Eerie albums and memorabilia. As hard as it is for me to say, if you’re only interested in Phil’s music, I would certainly advise against this purchase. Mount Eerie Pt. 6 & 7 is better when valued as an artifact than an album. Unfortunately, since it’s a fairly limited production (2400 copies), you probably won’t be able to hear it prior to purchasing, and you may not get what you expected. Buying Mount Eerie Pt. 6 & 7 may require something of a leap of faith, but in my experience its been well worth it.