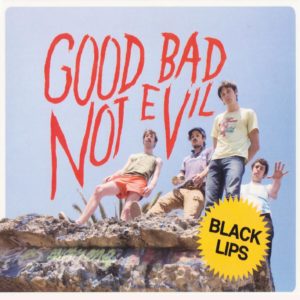 Consistenly, bands come along with style, songs, and a healthy dose of blood, p*ss and vomit. They put out 2-3 garage-fueled albums winning them a small but dedicated group of followers, primarily as a result of their raucous live performances. Then, these bands face a question: Do we stay in our comfort zone or take chances and see what happens?

Atlanta’s Black Lips are another band at this point having released three solid albums for Bomp Records and toured relentlessly across the U.S. Earlier this year, they evolved slightly, signed with Vice Records and released the live album Los Valientes del Mundo Nuevo. This album, recorded in Tijuana with hookers on stage, made me believe that they were standing pat. Then along came the swerving u-turn which is Good Bad Not Evil.

Still being the Black Lips, there are the prototypical lo-fi nuggets (I Saw a Ghost and Slime & Oxygen), but most of GBNE branches out of their Roky Erikson-inspired garage rock with mixed results. “Step Right Up” is the bastard son of the Velvet Underground’s “Run Run Run” only with even more feedback. “Cold Hands” – the catchiest two minutes the Lips have ever recorded and the three chord dirge “Lock and Key” both prove that blistering volume isn’t essential to making an impact.

The most staggering track is “Bad Kids” – a nostalgic tribute to juvenile delinquents that would have made a pre-Cavern era Beatles album easily. It feels so personal and bittersweet while still retaining the brutish essence of the Black Lips. Paul Westerberg would have killed to write this song in the 1980s.

The band’s greatest weapon – their warped sense of humor – is still fully intact. “Oh Katrina” is a bass-heavy stomp of a love song written during the middle of the hurricane that somehow out-rocks its overly topical title. Even more depraved is the Ween-esque straight-ahead country song “How Do You Tell a Child That Someone Has Died” with verses sung in the first-person to various children.

It’s painful that for every song that works on all levels – the Phil Spector meets Stone Roses handclap-fest “Veni Vidi Vici” – there is “Transcendental Light”, a piano laced attempt at semi-maturity that falls flat quickly.

Good Bad Not Evil is that cliched album that will introduce the band to a larger audience while not alienating their hardcore fans. The experimental side of me wants to utterly love this album for its versatility, but the puritanical side of me fears change and was slightly disappointed.

I was really excited to see any band who makes a point of recording a live album in one of the debauchery capitals of the world – Tijuana, Mexico. A show that might have dancing prostitutes and a mariachi band opening seems really intriguing.After waiting for three hours, through the dreadful opening band who sounded like Bloc Party with more toms, I grew quite agitated. Then the Black Lips took the stage looking very unassuming until the moment the music started. It was a non-stop full throttle set filled with two minute song after two minute song played with ridiculous intensity.There was only a crowd of about sixty people, but two thirds of them were clinically insane from the moment the first Lips song started. The manic energy of everyone there seemed unstoppable and slightly frightening to me.-Josh Carter