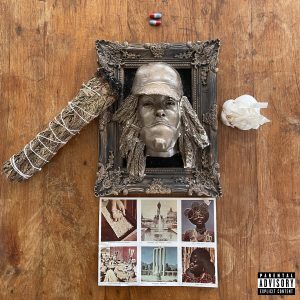 Right off of the bat, Earl Sweatshirt’s SICK! shows that this won’t be the typically subdued and despondent music we’re acclimated to from Earl. “Old Friend,” a title whose initials might reference Earl’s membership in the former rap group Odd Future, returns us to his up-and-coming career in rap from over a decade ago. A few references to this group crop up on this song, such as “And what remains of the wolves: nil,” (the group’s full name was Odd Future Wolf Gang Kill Them All, OFWGKTA for short) as well as throughout the record. We get the sense that Earl looks back fondly on these memories, even stating “Know I came from out the thicket smiling,” unusually straightforward and enthused lyrics from Earl given the gloom and sorrow of past projects like 2015’s I Don’t Like S**t, I Don’t Go Outside and 2018’s Some Rap Songs.

With producer Black Noi$e leading the charge, SICK! features Earl leaning into a trap-infused style on his beats. The two have collaborated in the past on “The Mint,” a notable track on Some Rap Songs. The first single for SICK!, “2010,” marked a new era of Earl’s sound. The title references the year around which Earl began to see mainstream attention, both as a solo act and member of Odd Future. The assertive bars continue, where Earl raps “Triumph over plight and immense loss / … / Saw another height, had my ears pop.” Synth arpeggios spiral up, then revert backwards, forming palindrome melodies throughout the track. With the addition of addictive trap drums, “2010” made for a bop that got me interested in the project to come.

Black Noi$e production continues on to “Vision” and “Titanic,” the former of which features Detroit rapper ZelooperZ. “Vision” opens with an obscure vocal sample, reminiscent of The Alchemist and his two This Thing of Ours EP’s. Following this is a euphoric beat drop, reminding me of the ever so smooth drop on “Let Go” by Aaron May. Though ZelooperZ’s verse isn’t as out there as most of the performances on his project “Van Goghs Left Ear,” the laid-back performance certainly fits the song. Earl’s verse brings home the theme of his views on recent and current events, trying to see through the smoke and mirrors produced by media misinformation. One line on the track reads as anti-vax upon first listen, where Earl states “Fuck out my face with syringe.” This is actually a reference to drug use however, given the context of the previous lines describing poverty and homelessness. A tweet from last summer contradicting this line also delegitimizes any claims of Earl being anti-vax.

“Titanic” rocked the boat as the third single from the project, fully committing to the energetic trap beat direction. Again, Earl looks back on his time as a teenager rising the ranks along with his friends. This time, Earl references his long-awaited return to the U.S. after being sent off to Samoa to complete a self-help program. When his mother learned of his involvement in drug use, she decided he would benefit from the program, shipping him to the island for a year-long program. The title to the song references sinking due to being capsized, relating this to “capping” too hard. Na-Kel smith makes a guest appearance on this track, leaving a footprint with some hilariously memorable ad-libs.

Aside from these trap bangers, we get more familiar-sounding Earl cuts in tracks like “Tabula Rasa.” “Tabula Rasa” seems as if you were to put the piano section on “The Mint” into its original order. Though Armand Hammer’s guest appearance on “Tabula Rasa” drags on for just a bit too long, Billy Woods’ gritty voice adds an interesting contrast to the fragile production.

The track listing begins to lag at the midway point with “Lye” and “Lobby (int),” which have some of the more forgettable performances both lyrically and instrumentally. Earl’s best verse on the project is on the track “God Laughs,” where the rapper thinks back on his grandfather’s passing and the pain it caused. The almost ambient production here allows Earl’s lyrics to take the full spotlight, highlighting the heaviest moment on the album. The title track to the record is produced by Navy Blue, long-time collaborator and friend of Earl. Though Earl’s delivery on the track feels a bit too lethargic and uninterested, the lyrics speak for themselves; the line “Can’t go outside no more ‘cause n****s sick” calls back to I Don’t Like S**t, I Don’t Go Outside, serving as a double-entendre for both COVID-19 and Earl’s growing distrust in the true intentions of most people.

The record ends with another Black Noi$e-produced track, “Fire in the Hole.” In the first half of the song, Earl says that, despite his recollection of the memories and their impact on him in this album, he recognizes his obligation to strive forward and advance in his life as well as in his music. The tone of his vocals come off much the same as on Some Rap Songs, calling back to the intimately detailed lyrics on the project. This is done over a pleasantly soulful guitar-led instrumental that notably fades in and out, as though someone keeps dunking the beat underwater. The final leg tunes into a sincere piano solo, leaving a lasting impression as the album’s final moments. “Fire in the Hole” effectively concludes the thoughts of reflection and contemplation included on the album. SICK! isn’t Earl’s best, largely due to the short lapse in concentration the record takes after the halfway point. However, Earl goes in a very interesting and dynamic artistic direction on this album, a far cry from the sullen, low-down sounds and thoughts in much of his prior releases.