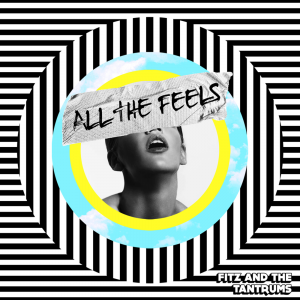 What makes an album good? Does it need to push the boundaries of innovation and experimentation, be niche and individualized? Or do people just need to enjoy it? That is the fundamental question for Fitz and the Tantrum’s new album, All the Feels.

When the upbeat, hard hitting beats of “I need help!” washed over my apartment where my roommates were studying, they went from a little head nod, to subtle sit dancing, to full fledged jumping around and scream singing before the end. With that kind of reaction it is difficult to say that the music isn’t “good.”

However, ever since Fitz’s first album, Pickin’ Up the Pieces, in 2010 there has been a noticeable decline in individuality. They had started off strong with a noticeable style, and had some more hits and intrigue in More Than Just a Dream in 2013, but their self-named album in 2017 and their newest, All the Feels, sounds like it could be just about any semi-talented pop schmuck off the street.

Not only are the synthesized beats and riffs literally artificial, but the names and lyrics also seem to appeal to a manufactured modern mass media audience, rather than questioning ideas or emotions that could lead to something deeper. The phrase “all the feels” is straight from the origins of meme culture on tumblr and twitter. Lyrics like “shits always broken, like my emotions” in “Basement” are reminiscent of those “relatable” posts all over social media. The themes and ideas of the songs seem to be made for teenagers to blast out of open windows after football games on the way to sonic with their biggest hope being that their crush will send them a good night text.

It is all very upbeat and positive, and even when some lyrics delve into some slight negativity it is portrayed in a very upbeat, “relatable” way. The songs have their place at kid’s sporting events or maybe as pump up tunes at the gym, but there isn’t enough substance to really entertain much in depth thought or interest.

Taking all of this into account, the songs that stand out as having the most possibility are “All the Feels,” “I Need Help!,” “Belladonna,” and “Kiss the Sky.” All are still very much in the realm of synthesized upbeat pop, but they have enough pizazz or rhythm that hits a little harder. “All the Feels” has a good slower tempo that invites the listener to dance. “I Need Help!” is going to be a real crowd pleaser with everyone singing along and jumping throughout the chorus. “Belladonna” is a little more rock leaning than the others, but with a strong electronic chorus and synthesized base. “Kiss the Sky” is catchy and like the rest, very upbeat and teenage “rebel” appealing.

Overall, if you are looking for a new workout song this album could be worth checking out. Or you could recommend it to your gen-z teenage sibling and they could be the “hipster” music person with new fluff songs that aren’t by the same ten people that all their friends listen to.