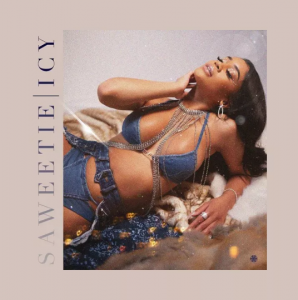 Bay area rapper Saweetie has been around for a couple years coming into popularity through her single “ICY GRL” and debut EP High Maintenance. Her sophomore EP, Icy, solidifies her potential and skills that critics caught a glimpse of in her first endeavors. A track EP running at about 21 minutes, Icy showcases the aptitude Saweetie has to offer and displays that she is a force to be reckoned with.

One thing that I like a lot about Saweetie is her confidence in her verses. She puts a lot of emphasis on being self-made and not needing others to help her rise to the top. The first track off of the EP, “Trick”, essentially tells listeners what Saweetie is all about. She raps about how she has money and doesn’t need anyone else, but also doesn’t mind if a guy spends some cash on her. It has a catchy simple beat, but Saweetie starts off strong with a smooth flow and hard-hitting punchlines.

The third track, titled “My Type”, is definitely one of my favorite tracks on the EP. The remixed sample of Petey Pablo’s “Freek-A-Leek” gave me early 2000’s hip-hop vibes. It is a very well-done remix and is a refreshing throwback to older club songs. In addition, I think Saweetie’s flow is at her strongest during this track. Definitely a track to play in your car at max volume.

A notable attribute of this project is the lack of featured artists. The only artist featured on Icy is rapper Quavo, who also happens to be Saweetie’s boyfriend. On only two out of seven tracks, “Tip Toes” and “Emotional”, Quavo gives a few verses that complement Saweetie’s very well. He plays a very supportive role and doesn’t take any focus off of Saweetie in either track, as he raps about his lover. Even with only one guest artist, Saweetie holds her own throughout Icy, proving that she really doesn’t need anyone else to achieve her goals.

The production on this album is an improvement from her previous works but isn’t too notable in the grand scheme of things. Besides the sampled songs, most tracks contain basic trap beats and percussion that show too many similarities to every other hip-hop song floating around in the mainstream. The instrumentals do their job at creating a fun and upbeat atmosphere, but that’s about as far as production goes on this EP.

Saweetie provides different flows and rhyme schemes over each track, showing growth and her lyrical versatility. One major issue, however, is that her subject matter is very generic and constant. There can only be so many lines about the ice on her wrist and the money she’s getting before listeners start to get a continuous sense of déjà vu. The songs are definitely enjoyable and fun but ultimately lack depth which limits the EP’s potential substantially.

It’s evident that Saweetie has the prowess to make it big in hip-hop. She put herself on the map with her first EP and showed her capability even further with this project. I have a feeling Saweetie is just getting started and that we’ll hear a lot more from this icy grl very soon.