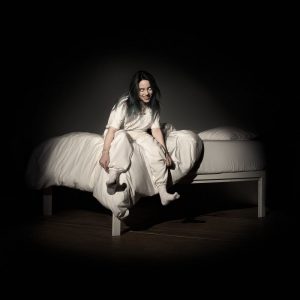 Yes, this review will fixate an inordinate amount on Billie Eilish’s age. Regrettably, I have a strong feeling that a lot of my lobs at this record would be nullified if she was an adult. I wish I didn’t feel that way but you really can’t separate the artist from the art these days.

The biggest lesson I learned when I was 17 was to not throw around absolutes. Anytime I outwardly expressed certainty (like, for example, saying “i love you” to someone I had known for maybe a few months) was a time I created trouble for myself. It’s a cliché, but when we’re on the cusp of adulthood we do feel like we know everything. We feel like the final evolution of ourselves, without any inclination toward agreeability or change in any direction. But it’s a delusion, as we soon realize: we’re yet to adjust to the real world. Thus, while we feel well-adjusted and correct in our judgement, we appear volatile and wholly chaotic in the world’s eyes. This cognitive dissonance is the very essence of WHEN WE ALL FALL ASLEEP, WHERE DO WE GO?

The inconsistencies with this record begin before the music even starts. As with her contemporaries (Ariana Grande, Lana Del Rey, Lorde… I guess Taylor Swift maybe, etc.), Billie Eilish is heavily industry-cushioned and unhealthily marketed. From what I can remember, Apple Music has had her work plastered all over their platform from when “bury a friend” was released. She’s been advertised as a dark, twisted, alternative artist with hidden depths and a kind of chaotic neutral personality. Billie isn’t for everyone, they want us to think. To be fair, you probably have to have a very high IQ to understand Billie Eilish. Perhaps her humour is extremely subtle, and without a solid grasp of theoretical physics most of the jokes will go over a typical listener’s head. Yet this album debuted at number 1 in the US, the UK, Canada, Norway, Sweden, Switzerland, Flanders, Ireland, Scotland, the Netherlands, Australia, and New Zealand, and still enjoys a comfortable seat within the Billboard 200 to this day. I’m not sure she’s that hard to get.

So what can one expect to actually hear on WHEN WE ALL FALL ASLEEP? Well, a pair of invisaligns being removed, firstly; a riveting 14-second intro that leads into what is probably still my favorite song, “bad guy.” Of all the many personas Eilish adopts on these 43 minutes, this is the one I hope she explores more. The instrumental reminded me of Depeche Mode instantly (probably not a direct influence but the eerie synth timbres are unmistakable), and the hushed, doubled vocals still send chills up my spine. Promise is shown on this inaugural track, setting the tone both sonically and lyrically. I expected nothing less than hearing “I’m that bad type / Make your mama sad type / Make your girlfriend mad tight / Might seduce your dad type” (once again, she’s 17), and apart from the completely unforeseen trap detour in the last 45 seconds, I felt I was willing to give Eilish a chance at this point.

Unfortunately, that cognitive dissonance that I mentioned plants its feet firmly on the next track, “xanny,” the first nose dive on this nauseating roller coaster of an album. Here we see Eilish, fresh off of seducing the listener with her “bad girl” flirts, now bragging that she “[doesn’t] need a xanny to feel better,” atop a laughably innocent vocal jazz song archetype reminiscent of a Disney movie where the protagonist longs to travel beyond their homeland. The lyrics repel exploration past that hook. Nevermind the obvious reeking belittlement of drug addiction and the underprivileged individuals who suffer from it; this song dunks the listener in the toilet bowl, acting like the track before it never happened, and mocking you for thinking it was gonna act frivolous.

It’s a shame: lyrics usually fall low on the priority list when it comes to my enjoyability of a new album. But I suppose sometimes the flaws are too glaring for my eyes to adjust. Take the repugnant and abhorrent “wish you were gay.” The eyerolls were excessive so far, but until this track I was still hesitant to pull out the word nauseating. The song, wherein Billie wishes she could use her love interest’s sexuality as an excuse for her unrequited love, requires an emphatically homophobic mind to be logically processed and empathized with. HEY BILLIE. MILLIONS OF LGBTQ+ YOUTH HAVE TO ENDURE INEXORABLE AMOUNTS OF OPPRESSION AND DISCRIMINATION AROUND THE WORLD, AND OFTEN WISH THEY WEREN’T GAY (OR TRANS OR QUEER OR NON-BINARY ETC.) IN ORDER TO SAVE THEIR OWN LIVES. PLEASE CONSIDER THAT THE CONCEPT OF WISHING YOUR CRUSH WAS GAY INSTEAD OF NOT LIKING YOU BACK BOASTS AN INSANELY PRIVILEGED AND DISTASTEFUL POINT OF VIEW AND IS PROBABLY THE REASON HE DOESN’T LIKE YOU. Glued together with stock applause, children cheering, and a lumbering vocal pop instrumental that sounds like it wants to collapse, this infuriating track is a testament to both Billie Eilish’s unbridled bravery and underdeveloped sense of perception.

These lyrical and thematic pitfalls make up the bulk of my gripes with this wretchedly lackluster album, but behind the gaudy exterior, I found undeniably fun and inventive features. Nearly all of the record was produced by Eilish’s older brother, Finneas, who no doubt has remarkable chops. Apart from his poor fixation on heavy tremolo and obnoxious bass boosts, his work on the often audacious instrumentals consistently engage me more than any other aspect of these songs. From the bouncy DJ Mustard-esque synth bass on “my strange addiction” to the moody, nuanced galloping rhythms of “bury a friend,” it can’t be ignored that the sound of WHEN WE ALL FALL ASLEEP is highly inventive for an album of this profile. Similarly, make no mistake, I am floored by Eilish’s gorgeous voice. Though this record cannot make up its mind on what style to adhere to, the vocals work pretty much every time.

It took an obscene amount of introspection and deliberation for me to ultimately reach the conclusion that this album is not good. I was intrigued since I heard about it and I gave it as many chances as I could. I would hear a blood-pumping electronic instrumental, but then hear a heavy dose of edgy posturing (“you should see me in a crown”). I would hear a stunning and tragically beautiful piano ballad (“when the party’s over”), but then immediately after hear some lazy ukulele strumming–it’s 2019, Billie–paired with an irritatingly artificial high-pitched voice (“8”). I would hear an instantly catchy and sensual hook, immediately followed by a quote from The Office, of all things (“my strange addiction”). It’s a violent tightrope Eilish is running across at top speed. Any joy this album brought me was soured as soon as my eyes lit up.

It would feel unfair to judge this poor musical faceplant solely on Eilish’s age if her being 17 hadn’t been the primary selling point that had been relentlessly pressed against the storefront window for the past few months. Let me be clear: Billie Eilish is a creative, entertaining, and alluring artist, though her exceptional potential is yet to be reached. Perhaps in the future, a full-length project will utilize these talents in a immensely more fulfilling way. But sadly, for this very young individual, the road ahead is long.