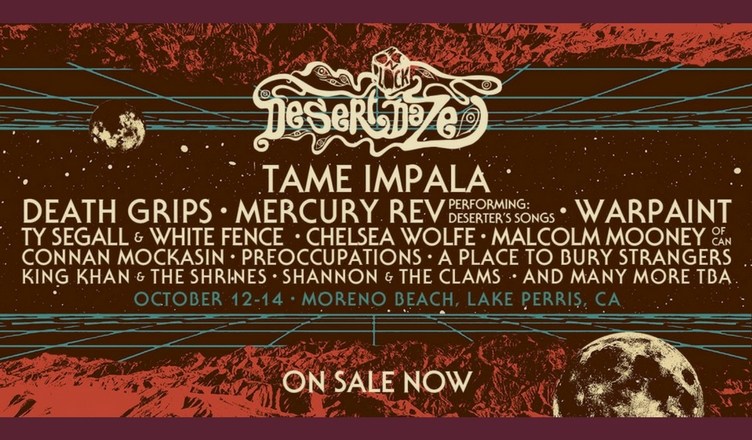 Year seven of Desert Daze, the “cosmic playground” festival based in southern California, boasts some of today’s biggest names in psychedelic music (Tame Impala and station favorite King Gizzard and the Lizard Wizard, for starters), plus some harder-to-catch sets us Texans can only wish were closer to home. The unique landscape — a desert beach surrounding a manmade lake, encompassed by mountains — makes Moreno Beach a standout location for the festival’s visual art installations and Mystic Bazaar, where campers can experience shamanic ceremonies, soundbaths, and more otherworldly activities. The lineup is solidly packed, so here’s who you won’t want to miss.

It’s been five years since the iconic, notoriously loud shoegaze band has played in Texas, and in true college radio form, this one’s on our bucket list. With new material on the horizon and recent shows under their belt, we can’t wait to see the pioneers of the genre back in the swing of things.

Even if you’ve never listened to Shellac, there’s a good chance you’ve listened to music found in frontman Steve Albini’s prolific audio engineering discography. He’s a busy dude, so tours are few and far between. The “minimalist” three piece is guaranteed to loud, clean, and concentrated on tone, delivering lyrically chaotic songs about things like rearranging the traditional order of numbers, and hating JFK for having an affair with your wife. Really relatable stuff.

If you’ve never seen Chelsea Wolfe, do it now while you still can– her performance at Desert Daze is the final stop of her last US tour “for a long while.” Mixing elements of darkwave, doom metal, and folk, she’ll leave you in awe at the heaviness and haunted by her voice.

Mercury Rev haven’t played too many US shows lately, and their performance of Deserter’s Songs at Desert Daze will be their first in the US for this tour. With the massive resurgence of Neo-Psychedelia that we’ve seen in the past couple of years, Mercury Rev stands up with Flaming Lips with strong releases through the 90’s.

Cited as a major influence of Sunn O))), Earth performing the more ambient “The Bees Made Honey in the Lion’s Skull” couldn’t be more fitting for Desert Daze. These Drone Metal pioneers should put on quite a show to enjoy in the western landscape of Moreno Beach.

Malcolm Mooney of Can

Former member of Can Malcolm Mooney had popped up to play a handful of shows over the past few years, and Desert Daze in October will be the next stop for him! We aren’t quite sure what to expect of such an show (whether there will be many performances of Can songs or not), yet it doesn’t strike us as a show to miss.

Slowdive has been touring around semi-consistently since 2014, and after releasing their self-titled 22 years after Pygmalion, they’ve had quite a good reason to keep doing so. With their Desert Daze performance coming in over a year after their album released, we’ve got good reason to believe that they have honed in their set quite well at this point.

For those sticking around in Dallas, or considering Desert Daze in the future, stay tuned to our social media during the fest as we’ll be providing coverage!