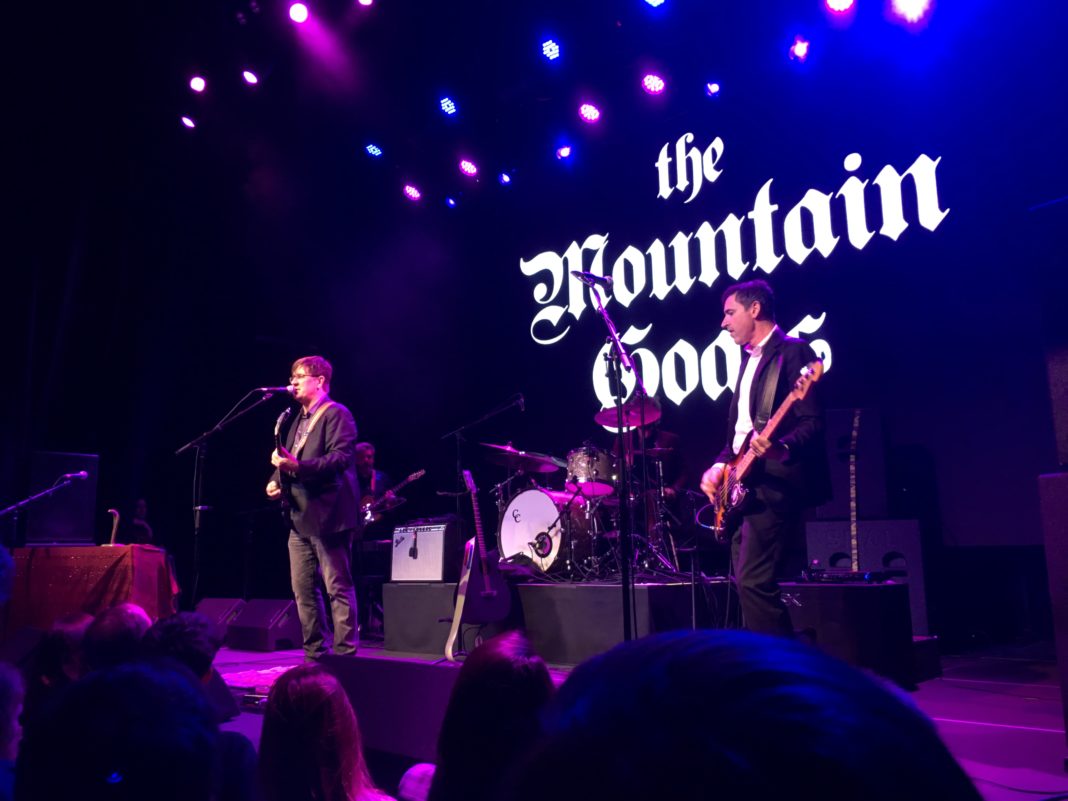 Seeing the line of metal fans and punk teens outside of Canton Hall, it’s not hard to guess who they were gathering to see. That’s right folks, The Mountain Goats are back in the Big D, this time featuring one of the lead singer’s favorite bands from his hometown, Al Riggs.

Al Riggs and their band have been making music for a while but only has a small following stemming from Durham, North Carolina, so it’s no wonder they seemed to be getting used to being up on a stage with lights flashing down on them. Still, they owned their performance with songs that had a groove and a strong drumbeat but are hard to classify into a genre. When I later asked their guitarist, Lauren, later how she’d classify the music, she said, “Loud, sad, and gay.” The crowd was into it, swaying and nodding along with the music. Al had a cool, smooth voice that paired perfectly with Lauren shredding the guitar and the drummer pounding on his small set while the bassist backed them all up. Between songs, Al mentioned that it was their first time in Texas and after that performance, I can only hope they come back to visit again.

When the time came for the headliner, all the lights in Canton Hall cut out as a loud and fast metal song blasted over the speakers. Then their name flashed on the screen behind the stage, “The Mountain Goats” written in a curving, Gothic script. Then the four men walked out, dressed in an array of blazers, button ups, and suits. They started the night with “High Hawk Season,” rendering the soft, choral song with the full band and a black, lightning bolt electric guitar. The crowd jumped right in, singing the choral parts from the original recording along with John Darnielle, the songwriter and lead of the band. Without much of a pause, the band played on from there, jumping all over their decades of discography for a mix of old and new.

In the middle of the show, the stage emptied, leaving only John and his multi-instrumentalist bandmate on piano and saxophone. The venue transformed into a kind of jazz club as John soulfully sang “Wear Black” from his newest album, Goths. The crowd was respectfully quiet throughout the song, their eyes turned up to John on stage. Though the band returned to the stage shortly, the jazz club vibe didn’t disappear as John took to his keyboard for a smooth rendition of “Lakeside View Apartments Suite.” All the while, everyone in the room, including all the men on stage, were grinning and having a good time with the music.

The band left the stage after about 15 songs but quickly reappeared as the crowd cheered. They immediately brought the energy levels up with “See America Right,” a fast and heavy song that got everyone jumping and yelling. They played two more crowd favorites, ending with John asking the crowd, “Do you want to get a divorce?” and moving into one of their most famous songs, “No Children.” John wandered around the front of the stage with the microphone, singing the lyrics with the crowd, and pausing occasionally to point at someone in the crowd, or even kneel to sing straight into someone’s eyes. It was a cathartic experience that left everyone hungry for even more. The band returned to the stage one last time to sing a quiet rendition of “Spent Gladiator II” and then tap out for the night.

I’ve grown into a much bigger fan of The Mountain Goats since I saw them a year ago, so the concert was an exciting experience to share the music I love and learn that I still have so much more of their discography to explore.