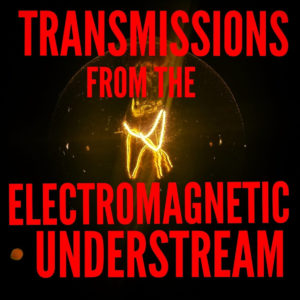 Never have I listened to an album that embodies its title so fittingly. Though for years they were known for their “voodoo-stomp-rock-vibe,” The Peculiar Pretzelmen have obviously changed their sound a bit-but it’s not entirely for the better. These songs are slower and darker than their past releases, pushing the latter to a point where it’s not coming off as authentic and curious as it used to be. Their planning was superb in the fact it came out on a Friday the 13th, and the start of the album was promising, with an ominous instrumental followed by the beginning percussions of “Death Rattle.”

“Make blues, not bombs,” the promotional tagline the band has been using for this new album, didn’t even hold strong prominence within it. It was part of the chorus in one of the album’s opening songs, which was very forgetful and not even two minutes long. To describe the overall mood for Transmissions from the Electromagnetic Understream, it’s like Blues Brothers impersonators are journeying River-Styx-style through a swamp atop a rusty Mars Rover.

There’s a whopping 15 songs on this album, with the most promising songs cut too short before they could further develop, and the less-enticing ones shouldn’t have lasted for more than three minutes. The one exception to this was toward the end of the album with “Cut Out to be Clyde,” which was 7 minutes and 30 seconds, because it flowed well and didn’t lose momentum.

When it comes to the niche genres The Peculiar Pretzelmen are a part of, dark cabaret and southern gothic to be specific, there is a very fine line between a good song and a bad one. For example, the southern gothic motif of going down to the river to drown instead of to obtain salvation was overused after hearing it in both “River” and “Down to the Water.” It loses its attractively haunting effect and just comes off as an uncanny trope that’s trying too hard to be dark. There was a lot more spoken word than usual, but some of it didn’t really make any sense.

Not all songs missed the mark, however. Throughout the album, very strong lyrics were scattered, which still are poignant in my mind. From “One Man Hang,” there was the line: “You can’t take the king if you can’t control your pawn.” Another memorable line was the somewhat-apology in “Cut Out To Be Clyde”: “Sorry for the bullet holes/That ain’t the punctuation I had in mind.” It’s a shame that they’re aren’t many more of these examples to talk about, because these instances are proof that The Peculiar Pretzelmen do still contain the talent and style that gave them the cult-like fan base they have today.

Innumerable Seeds of Calamity and Uncanny Eyes– the first two albums by The Peculiar Pretzelmen from the last decade—were both unique, well composed, and had a rounded variation between the tempos, instruments, and subject matter in their songs.  The more recent albums by this band haven’t been at their best, and this is especially the case for Transmissions from the Electromagnetic Understream.