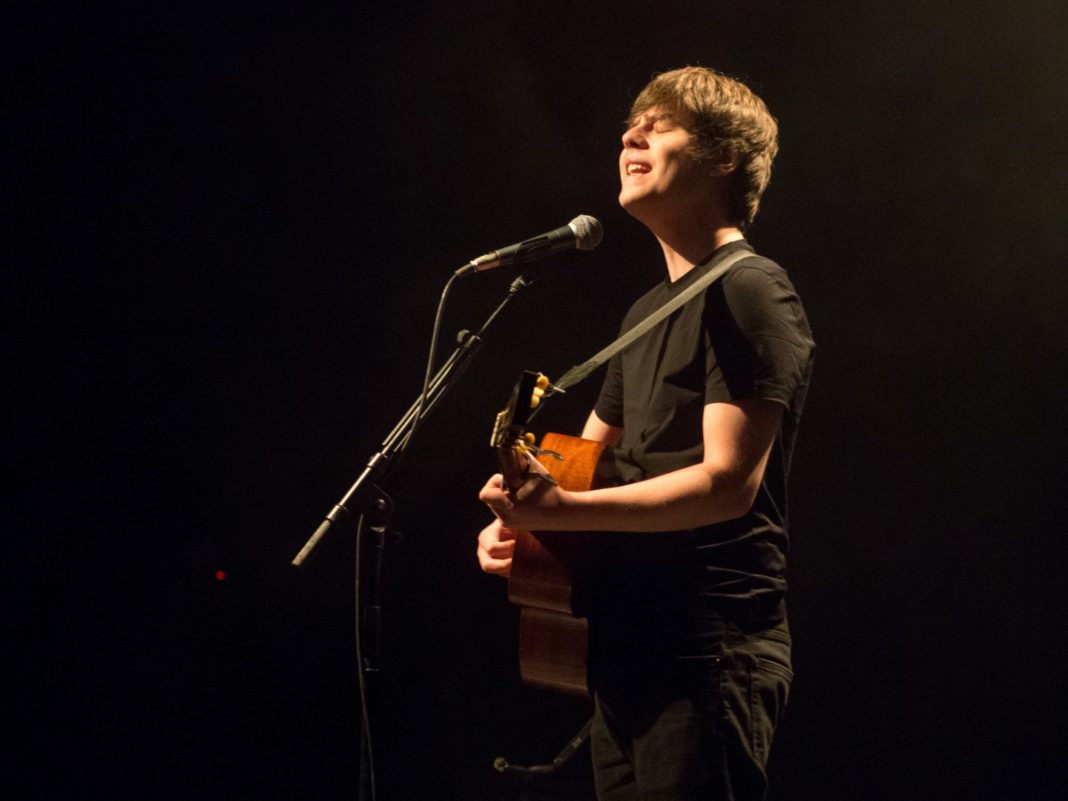 On Jake Bugg’s latest stop in Dallas at the Kessler Theater, we had the chance to sit down with him before the show to talk about how he makes music, his influences, and his desire to continue pushing himself to experiment with his sound.

Whenever you go to finally start making a song or an album, how do you get started?

Well depends really, it depends, I might pick up my instrument, I might come up with a melody in the shower or something like that. Usually I pick up a guitar or the piano and that’s usually how it comes about, more out of spontaneity than anything.

Once you do that and you start to get recording, when do you know that a song is finished?

Do you ever look back at some of your past songs and think that you could’ve done them better, or something you wish you could have changed?

I think there’s probably things like that, like production things and things like that. But at the same time, it’s been captured in a moment of time, and so it is what it is. You can’t reflect too much on that, you just gotta learn and keep pushing on and make new tracks and try not make any mistakes that you would wanna change.

You mentioned its sort of like a moment in time, do you think that your music pulls from real life? So for example, we could look at those moments in time and that’s sort of where your life was at at the moment?

In some songs yeah, especially from the first two records. But I’ve always liked to use music as a form of escape really, so sometimes I just like to drift away in my mind and use my imagination, come up with a story, and place myself somewhere otherwise I would never get to be.

What was it like working with Rick Rubin on Shangri La?

It was cool, it was a great process, very easy, very relaxed and he’s great at what he does obviously, so it was a pleasure to work with him and get that opportunity to soak in some experience from being around him and the musicians he brought in like Chad Smith, and Matt Sweeney, and Jason Lader. It was just overall a great experience, and I loved making that album, and it was a very easy album to make too.

Did he work with you throughout the entire thing?

Yeah from start to finish.

How was recording that different from recording your debut?

The debut was recorded in various different studios, in all parts of the UK, and because I guess there was no material out before the first record, you can kind of go into it a little more open, whereas the second one you kind of have to give the fans something that they wanted, but at the same time try moving forward in terms of sound and songwriting.

So do you ever the need to please your fans instead of making the music you want?

No not really, no. I want to make music for all people to enjoy, you can’t deviate too far on the next step, but you can’t do the same thing as well because otherwise its boring.

On My One was stylistically quite different from those first two albums, so how was the process for that different? I know there were more electronic elements in it like drum machines.

Yeah there’s some drum machines and synthesizers and it was more of an experiment, it was an opportunity for me to take everything that I had learned from different writers and producers and people in the industry to go experiment and try new things. Learn about what to do and what not to do. It was a good record for me to make in terms of taking everything I had learned, and try to get something out of it.

Was there something that pushed you to want to experiment more on that album?

I always want to experiment, that’s why the fourth record is very different from the third, and the third different from the second. For me that’s what keeps it interesting, gives me that sense of adventure, it’s like going on a journey and I want the listeners to feel that too.

Since you mentioned the fourth album, what was it like working with Noah Cyrus?

She was great, an amazing voice and it was very nice to work with someone from a different musical background and to collaborate. I loved the outcome of the song, and I feel her voice suited the song very, very well.

Speaking on that, whenever you’re making music do you prefer to work more on your own, or do you like the collaborative aspect of it?

I like both, last few years I’ve been working a lot on my own, so now I want to go try out some new things and experiment a little more, so I want to work with some different people. Who yet I haven’t decided, but I’m looking forward to the next chapter and hopefully I can have a record that’s very different from this last one and a little bit fresh and a bit more up-tempo as well I would like.

Would you ever switch to a new genre? Or is there a specific genre you would want to take influence from that you haven’t from yet?

It’d be nice to try and pull the pop element into what I do this time around. I’ve been intrigued in a lot of pop music and I love all kinds of music so I’ve always had an interest in blending genres and trying new things and sometimes it’s good sometimes it’s bad, so we’ll see what happens.

Like you had mentioned earlier, On My One was like your big experimental record. From that, what do you think would be the biggest lesson that you learned that you applied to Hearts That Strain and that you sort of plan on using for your next few records.

I think On My One, I like all the songs I just felt like as a whole the production of it could have been a bit more compiled, but it was a very difficult time in terms of what was going around me and my record label and things, so it wasn’t. I feel like from some people’s side it wasn’t managed particularly well, and I didn’t get to get the actual record out of it that I wanted but at the same time that’s something you learn and I still like that record, and some people still love it, so that’s the way it goes sometimes.

Would you like sort of a second chance at going back to trying that whole big experimental project again done better?

I’d just like it recorded all a different way, I like all the songs like I said, I’d just like it to have an overall sound really because I feel like it throws you around a little bit that record. But I think if you take a song away from it, usually it sits in the set quite nice live.

Are there any specific influences you try to pull from or is it each album you look at different people or different influences, or is there sort of a more constant base you pull from?

I’m always going to have the influences that I grew up with, but as time goes on you discover new artists, and that usually happens when you’re in the process of making a record. With the musicians you’re working with, you get shown different things and different records and that’s one of the bonuses of making it. I don’t like to think too hard about what I want a record to sound like to be honest, because I like just picking up an instrument, writing something, and coming up with something that I probably never thought I would have.

To be honest a lot of the music I hear on the charts I don’t find very inspiring. I think it’s just trying to be accessible. I feel like a lot of the music today, the production is the song, there isn’t really a song in it, especially in a lot of trap music. And unfortunately, that’s the way the world’s going and music has been simplified a lot more. It’s very difficult, as a writer when there’s nothing to draw from, a track or something that’s in the charts because musically and lyrically I feel it’s lacking, you can’t draw much away from it. But there are a couple of people out there that are great, I think Joey Badass is a very talented guy, I think Run The Jewels are very cool, so you know there are some people out there making good music. It’s just becoming harder and harder to find underneath a blanket of all this music we hear in the charts.

You mentioned two hip-hop artists, which is a completely different genre from what you make obviously, so from them what sort of inspiration do you take, is it the lyricism?

With Joey it’s a bit of lyricism, but also, I think Run The Jewels is just different. I like people that try something different and it sounds unique and it sounds fresh. I don’t have any appreciation for artists that are just chasing after the sought-after sound or whatever’s big at the time, it’s boring and lazy I think.