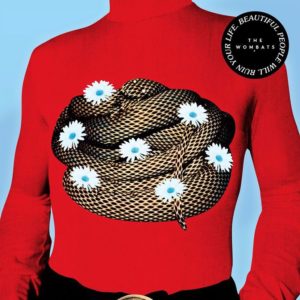 The Wombats have stuck with the times through the years, playing slightly angsty alternative pop rock on their debut album in the 2000’s and evolving to become a pretty straightforward indie pop rock band as that genre has become more popular. Their newest album, Beautiful People Will Ruin Your Life, sticks closely with the current indie rock scene just like their past music. Don’t get me wrong, it’s good stuff that my indie loving heart eats right up, but if looking for a truly independent and different sound, look elsewhere. Many of the songs bring to mind The Killers, Cage the Elephant, Arctic Monkeys, and other big names in the scene, so if you are interested in those then this album will most likely be more of exactly what you love.

The highlights combine some different vibes and create slightly more intrigue than any old pop rock song. The first song of the album, “Cheetah Tongue”, has some 90’s indie rock vibes reminiscent of Semisonic, but also very much modern melodies similar to other songs of now. The intro guitar especially pulls you in but also reminds me of watching 10 Things I Hate About You (which is never a bad thing to me, but to each their own).

“Turn” utilizes the classic pop and rock technique of pausing just before the chorus and just after he proclaims into the silence “it won’t get better than this,” an unconscious call of action to make it better. It is a fun anthem rock tune that I could very easily picture being a crowd pleasing jam at festivals.

“Lethal Combination” is the most distinct and best song of the album. It starts with a loud shebang and then very minimal instruments building with a very catchy and unique melody up to the chorus and on. This song is a standout in terms of rhythm and musicality, but the meaning behind it is the main message of the album.

The story of Beautiful People Will Ruin Your Life follows a couple where it isn’t really working and both are going slightly crazy (but all to an upbeat tune of course). The first seven songs all build to crazier and crazier themes, until “Out of My Head”, which essentially is him “off the deep end” in different lyrical forms. The turning point song is “I Only Wear Black” where the words are over the top emo and satirically complaining to the most upbeat tune of the album, emphasizing the absurdity. Afterwards the songs have more of a positive vibe about love and the future, especially “Dip You in Honey” which captures the essence of being in sweet, sappy love exactly. The last track that follows it, “I Don’t Know Why I Like You But I Do”,  has the slowest and most low-key melody of the album which softly prepares the listener for a relaxing end with no new ideas or inspiration, but hopefully a pleasant mood.