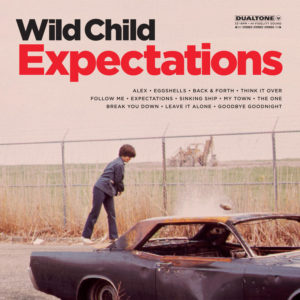 On first listen, I underappreciated it. On second listen, I almost went into tears two or three times. Bands change, they’re supposed to evolve and find themselves as they practice their craft; such is what continues to happen with the Austin-based band Wild Child. Wild Child is just as whimsical as always and are still masters at creating music that embodies all the emotions, conflicts, pain, and sincerity that comes into and leaves every love story. In Expectations, Wild Child once again explores themes associated with love and love lost, but they also focus on relationships in another phase: those “it’s complicated” situations, where you know the relationship is dead, doomed, or badly damaged. Of course, they released it less than a week before Valentine’s Day, because they knew their single fans would love blasting it all day.

They haven’t abandoned their original style in instrumentation and general mood from Pillow Talk, but their sound has evolved throughout the past seven years. This change was extremely noticeable in their previous album, Fools, but the selection of songs in Expectations is far more reminiscent of their earlier creations.

The opening song, “Alex,” is very reminiscent of The Runaround era, welcoming us with the familiar sound of Alex Beggins and Kelsey Wilson’s dynamic, along with that of a child’s voice in the opening seconds. It gives off a strong late-spring-early-summer vibe, which carries through for the rest of the album. Instruments that give the band their unique vibe- such as violin, cello, and trumpets-make their appearance as well as some robust blues influences.  Towards the end of the album, “The One,” “Leave It Alone,” and “Goodbye Goodnight” are all very resonant to their sound 7 years ago, with fanciful, unorthodox, and imaginative instrumentation. In this album, they seemed to especially introduce more compositions with Wilson as either the main or solo vocals, which in effect revealed that her vocal style is far vaster than we we’ve been exposed to. She’s able to go in strong and rich like in “Think it Over,” and then delicate with a soft piano accompaniment like in “Follow Me.” Before “Sinking Ship,” we’d never heard her hit higher notes like that, along with being amazingly melodic and soft.

Though Wilson was given more of a focus than in previous years, the band didn’t forget to include new duets with her and Beggins of which they are renowned for. Their lyrical skill hasn’t been neglected either, as they are able to simply yet evocatively convey the feelings, thoughts, and situations one has in wobbly relationships. “The One” does this especially well in both areas, with an eccentric dialogue-style duet.

Overall, Expectations was less folk-influenced than their original sound that many fans fell in love with, which follows in the same vein that their previous album Fools gave off. In this new installment, many of the songs gave off a chill-alternative vibe like they could be heard on the radio. Yet, they’ve been able to keep the same base sound- at the core it’s still the emotional, intimate themes and beautiful tunes of Wild Child.