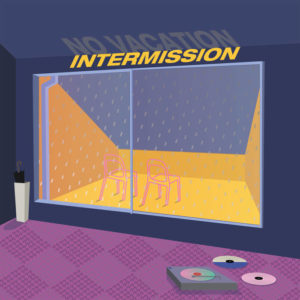 No Vacation has been hinting at the release of their new EP, Intermission since March, first with the release of the track “Mind Fields” and then with “Yam Yam“ in May, both very promising tracks. Intermission brings a feeling of melancholy and personal nostalgia, which can be deciphered in a thousand different ways depending on your experience with break-ups and longing. The EP is unique in that its dream-pop sound mixes with lo-fi in the cleanest manner possible, allowing for interpretation to vary from relaxing, carefree release (based on Ben Yung’s interpretation from The Revue) to rainy, winter soundtrack to even a picnic blanket and surf type of setting (based on Andy Peterson’s interpretation from Live4Ever). It’s no doubt that the lyricist of the music group went through breakup; the feelings of regret, fighting, and wear and tear are exemplified perfectly through Intermission.

The vibe of the EP is set through the instrumental title track, Intermission, placed purposely in in between the songs as its own namesake. The track starts with a piano melody, admittedly a little sloppy, but notably creative in its attempt to play with a pentatonic theme. With the entrance of rain and thunder sounds, the track successfully describes the EP’s backdrop as a cloudy and clean fall/winter sad jam. All the other songs (except the first song) have melancholy atmospheres lyrically, mainly centering around break up.

Musically, the EP has a strong and creative rhythm section that truly carries the EP. Without the charisma and energy of the percussion and the charm and drive of the (often walking) bass line, Intermission would feel quite boring and dull. The guitar is clean and tries to create licks, but doesn’t really go past varying arpeggios, simple three note repetitions, and jangly chords (same for the piano). The vocals, for pretty much the whole release, stay in the same mid-tone range, complete with the singer’s seemingly never-ending, monotone, whisper-like voice. Intermission plays with repetition a lot, and at times, way too much. Perhaps this was intentional, to drive home the idea of this endless melancholy state that breakup seems to perpetuate, but the lyricist loves to repeat the same lines over and over again. The guitarists take note and compliment with, of course, very repetitive lines that some tracks definitely could do without.

However, the EP has a lot of promise once the artists explore their creativity in musicality. “You’re Not With Me” stands out in the release because of its charismatic but honest feel, making for a truly beautiful song that’s actually really fun despite its gloomy, reflective (and repetitive) lyrics: “And I’m 365 days away/You’re not with me anymore…I was too tired to argue with you/I was too tired, so I let it go”. The guitar fingerpicks gorgeously with an interesting chord progression that is joined with waves of calming synth and an unexpected percussion rhythm that’s as cool as dream-pop can be. Once the chorus hits, the melody plays along with the rhythm in an exciting, catchy way with syncopation interlaced in between line drops. The track is definitely a fall-winter bop that makes the cold, short days feel like summer.

“Mind Fields” is similar to “You’re Not With Me” in that it’s a really exciting song, but is different in that it doesn’t actually sound depressing. The track is really catchy in melody, especially in the chorus. All of the instrumentation displays a relentless activeness, even the synth, full of drive and dynamism. The lyrics center around a theme of the nearing of a breakup, and the snarkiness of the words compliment the musical attitude of the track: “Take a photo/Put it in your pocket/Promise you won’t change your ways/Promise I won’t stay the same…Call you later/something that you forget… Maybe we should call it quits/But you never gave a shit.” Although the vocalist’s ah’s and oh’s get boring in the bridge intro and ending of the song, it’s excusable once the bridge actually comes in; a beautiful, aloof flute melody begins, but eventually turns into a vibrating alien sound that is joined in with a sexy, sexy drum beat and a magnetic bass line. Mind Fields is definitely the “fun” song of the EP, so it’s no surprise this track was chosen to initially tease the EP back in March.

Intermission is the perfect soundtrack for this fall/winter season, especially if you haven’t cuffed anyone as of late. Despite its flaws in terms of repetition and, at times, mundane, the EP shines with creativity in some tracks, having potential in becoming successful indie hits. The rhythm section deserves praise in the dream-pop/lo-fi release, truly bringing the EP together in a fun, sexy, and almost summery way. With the release of Intermission, No Vacation definitely intrigues current listeners as well as new.