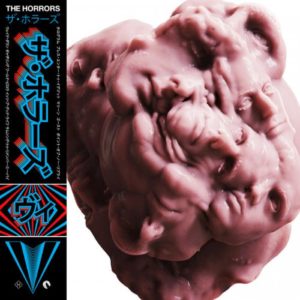 It’s been a few years since we have heard anything out of the emo-punk turned
electronic band The Horrors. Their last album Luminous was released in 2014,
which was in short, forgettable and mediocre. Then out of nowhere they announce
V, which is the group’s 5th album and after initial listens, seems to only give a few
new ideas and songs that are worth listening to again.

With the help of recording engineer Paul Epworth, who has worked with such
bands as Death From Above, U2 and Adele, The Horrors venture into more exciting
and interesting areas with their sound on songs like “Machine” and “World Below,”
but still keep the same airy and ambient synth layered style that they’ve developed
and used since their third album Skying. For die hard fans of The Horrors and the
shoegaze synth style, this album is a decent offering, but for listeners looking for
something more exciting and engaging are sadly better off just picking up the singles
and moving on.

In their lead single “Machine,” they go into more darker territories that remind the
listener of Nine Inch Nails’ The Downward Spiral or Deepeche Mode’s Violator, which
is very apparent with the beginning sounding like air being forcibly pumped into
your lungs by a machine before the full band comes in. Sadly, the only other time the
band really dive deeper into this new territory of sound is sparse on the album, like
with the climax in “Ghost” or their song “World Below.”

As for the lyrics and vocals on the album, Faris Badwan still utilizes his low, heavily
British and calming singing style with interesting lyrics over the album. With the
lyrics and chorus of “Machine” being “Because you will never, never, never, be Yeah
you will never, never, never, be More than a machine” it seems like Faris’ way of
calling someone fake or disingenuous, which is step up from just calling someone
that flat out and fitting with the overall imagery in this album. The use of machines
and electronic metaphors is prevalent in V in its lyrics and song titles like
“Hologram” and “Press Enter to Exit,” along with the lead single “Machine.”

The Horrors have been able to drastically change their sound over and over again
since they first started in 2005, they seem to have found one that they’re
comfortable with and plan to use for probably the rest of their career as a band, but
for this reviewer, they still need to keep pushing into a territory of their own. V hints
at an exciting sound with harsher synths, loud screeching guitar solos and imagery
of androids, holograms and more, but the listener has to sit through weaker laid-
back shoegaze before getting to the more exciting parts.

The Horrors have never been able to really quite break out of the crowd and give
the general mainstream something unique from their contemporaries to push them
into that next level. With tracks like “Machine” and “World Below,” they make a good
attempt, but the more laid back and uninspiring songs like “Point of No Reply” and
“It’s a Good Life” keep it from really being a standout album. Bands that use layers of synthesizers to give that chilled, floating feeling of calm and serenity are a dime a
dozen these days and if The Horrors plan to keep fans interested they need to really
step up their game and give them something worth waiting three years for.