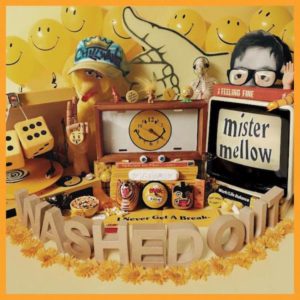 The relative silence of Ernest Greene did not go unnoticed. The four year gap between albums, besides the occasional performance, after a hearty attempt at soft, ambient-esque rock caused us to scratch our heads and think what to make of it all. Washed Out, the pioneer of the chillwave was starting to become… forgotten. The fruitful year of 2016 showed music taken to new depths and horizons and it seemed almost impossible to keep up with it all, let alone return to something old and still be impressed. Ernest Greene saw this time as a point of reflection, perhaps, (I speculate), because his return as Washed Out in 2017 truly is a return, in a hazy mirage of psychedelic imagery, muddy rhythms and chops and that unforgettable vocal reverb.

What does this amount to though? It wouldn’t be slightly fair to say this is a repeat of Within & Without (2010), but a whole new concept. Mister Mellow takes its browns and yellows very seriously, burying the listener in a heavy and distorted field of sounds. Lesser polish, more dirt, the rough-around-the-edges nature of each song reminisces on the hot summer days of 7 years ago, after tokes of marijuana and sitting in silence.

The lackadaisical vibe of Mister Mellow comes with its seasonal application. “Time Off” articulates this near the start of the album over its spooky and echoed production. The slow pace sits the listener down after the build of track two, but wants, not demands, to keep you seated throughout the album.

It’s here that Washed Out makes his return as something familiar, nostalgically reminding us of his debut and re-experiencing his flavor while you wade through the album instead of intently paying attention to the song writing.

The wading process is emphasized through its faded transitions between tracks. Gentle rings of strings, xylophone-esque keys and afro beats enter and exit, like “Floating By” to “I’ve Been Daydreaming My Entire Life”, or “Zonked” to “Get Lost.” Ernest Greene doesn’t force anything on the tracks either, allowing rhythms and sounds to stir in solidarity sans vocals for much of the album. In a way this was safe, but an expression nonetheless. Ernest took a seat himself as well.

But the strongest of Washed Out comes from that dense reverb vocal quality which sparked interest year ago. Its comeback on tracks like “Burn Out Blues” and “Hard To Say Goodbye” excel in the repertoire of impressive releases of prior Washed Out, only really going tepid on the last track “Million Miles Away” – mostly due to an overly slow, show gaze anthem(?) which only has its place in specific times and places.

At twenty-nine and a half minutes, the brevity of Mister Mellow is cleansing. As mentioned before, the conciseness is appreciated and, more importantly, without much fault. The warped guitar and rattling production is never overdone nor under-utilized – unless you’re bothered by how far the track “Instant Calm” goes.

It’s a toss whether Mister Mellow stands as concept release or just a better album altogether. The visual stimuli of kaleidoscopic imagery is a decent touch but not an absolute must-have, although I’m sure it will have its moments during the live performances. Washed Out has reentered in relevancy and we’re happy to oblige Ernest Greene in sitting down along with him. Sure – we’ll take a hit and get lost while we’re at it.