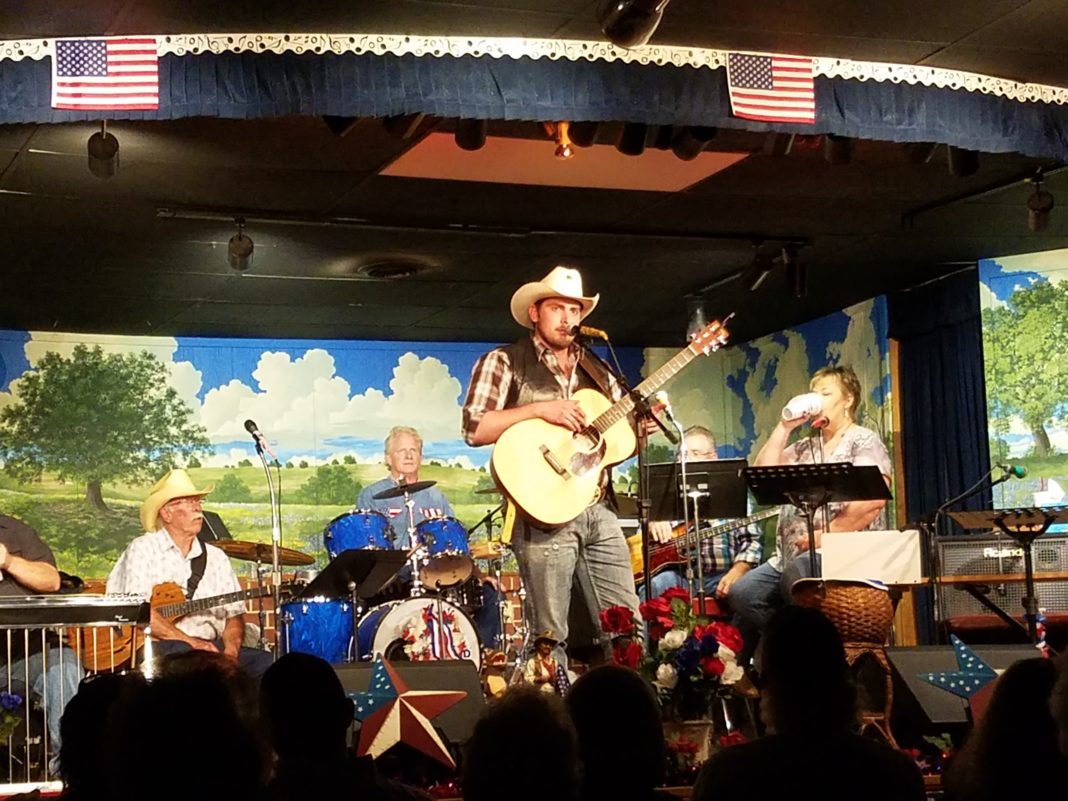 The Wylie Opry, situated in the quiet shopping strip of Downtown Wylie, hosts a variety of local artists from gospel to country every Friday and Saturday night. The one-roomed venue is run by a quaint group of citizens in the community who make their patronage travel each week to listen to a soiree of musicians, both amateur and seasoned, who perform with the tenured Texas Legend Band that consisted of a flat-bed steel guitar, lead guitar, drum, bass, and lead vocals. This past Saturday evening, the Wylie Opry celebrated Memorial Day with a feature a list of guest artists including military veterans Marcus Leary, a traditional country entertainer, and Brandon Bamburg, a Texas outlaw artist, both of whom served in the Navy. In tune with the small town’s catch phrase “Wide Awake Wylie”, these artists brought livelihood to the historic Wylie Opry.

Before either of the featured artists performed, the lights flickered on in the dim room as the Master of Ceremonies walked towards the front of the room. He recognized local birthdays, wedding anniversaries, and other achievements as well as an in-depth tribute to American veterans. The small-town comradery rang throughout the room with brief cheers and waves to one another during the oddly-timed intermission. Eventually the lights died down once more and the musical performances continued. Of the two veterans, the first to take the stage was Marcus Leary. Entering the small room with a bright green guitar, Leary wowed the crowd with an immediate deep-voiced greeting. While he only performed two songs in front of the 50 or so patrons, Leary’s presence stole the older viewers’ hearts as he opened with “Can’t Help Falling in Love” made famous by Elvis Presley. He then continued with a patriotic tribute to the upcoming holiday as he finished with a cover of “Courtesy of the Red, White, & Blue” by Toby Keith. As an artist, Leary stood out as a crowd-pleaser while allowing both men and women to fall in love with his traditional cowboy persona.

Fellow guest artists for the evening performed songs from artists ranging in time eras including Johnny Cash, Billy Currington, and Keith Urban. Brandon Bamburg was the last of the spotlighted musicians to take the audience by storm following Leary’s performance with a large bad boy personality that rang true to the music he generally performs. Bamburg is an artist centered in North Texas who prides himself on his outlaw sound when he performs. His first song was a cover of “Have You Forgotten?” by Darryl Worley that details a tribute to American soldiers. He paused on stage to ask the crowd goers to take a moment in remembrance for firefighters, police officers, and military personnel alike. He then finished his performance with “Fightin Side of Me”, a classic country song written by Merle Haggard, as the audience swayed back and forth to the patriotically infused cover by Bamburg. He finished his set list with an energetic goodbye as the patrons began filing out of the red, white, and blue themed room.

The Saturday night country shows at the Wylie Opry rattle awake the sleepy town with the variety of music that swings through the area every week. Leary and Bamburg warmed the hearts of folks on this Memorial Day weekend with their personalities and veteran backgrounds. Fans left the Opry humming to the tunes of a “stars and stripes” evening.