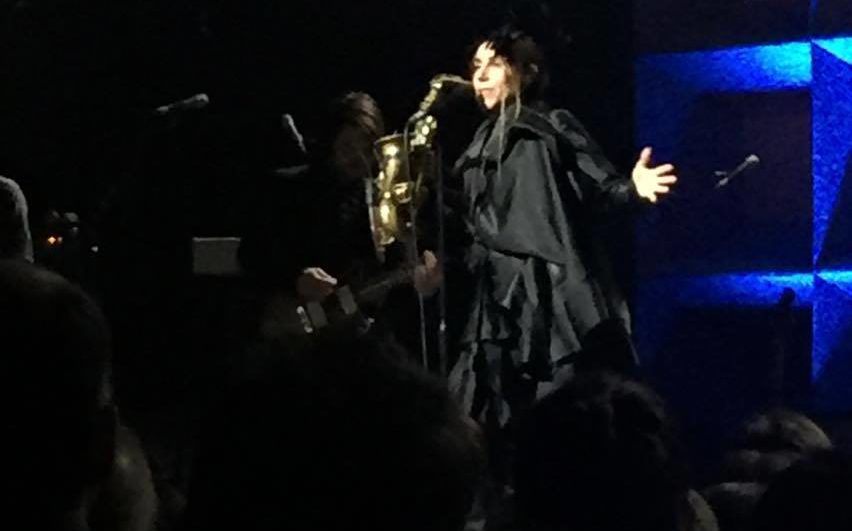 The solemn opening drum beats of PJ Harvey’s “Chain of Keys” compelled the audience to move forward as Harvey and her band revved up to play their first set in Dallas in over a decade. The band is comprised of 9 incredibly talented musicians, including Mick Harvey, who has worked very closely with Nick Cave among other brilliant artists (Mick and PJ are not related). All members of the band shared the space of the stage equally and beautifully, transitioning from place to place and from instrument to instrument smoothly and harmoniously.

The sound of the crowd, which consisted mainly of middle-aged, die-hard fans, was almost immediately drowned out by the aggressive but ever-gorgeous sound of classic PJ Harvey saxophones. Harvey herself, adorned in her iconic black, crow-like outfit, stood back on the stage playing hers, which she otherwise held over her head as she sang.

Harvey’s vocals rose flawlessly above the noisy, droll instrumentals to create a perfect juxtaposition. As she repeated passionately, “What if I take my problem to the United Nations?”, almost every fan, as American as most of their accents sounded, screamed along with hands raised. Harvey played songs old and new, but stuck mainly to those from her two most recent albums, The Hope Six Demolition Project (2016) and Let England Shake (2011). She and the band furiously blended sounds of percussion, guitar, saxophone, violin, clapping, and singing to give a studio-quality sound along with the excitement of a long-due live show.

During the encore, which the crowd absolutely begged for, she played the upbeat but dark “Highway ’61 Revisited,” and finally ended with “The Last Living Rose.” Her set lasted almost 2 hours, and started right on time. All-in-all, this is definitely the show fans deserved after waiting 10 long years, and it’s sure to tide them over until Harvey returns once again.