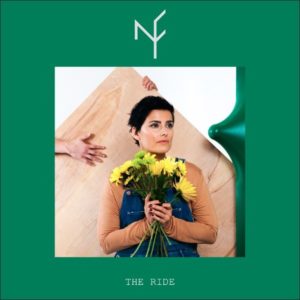 After 10 years of being off the pop culture map, Nelly Furtado has reinvented herself, or returned to a more self assured version of her old self. Transitioning from “I’m Like a Bird” free spirited Nelly, to “Promiscuous” girl on her Loose collab with producer Timbaland where almost every one of the songs were instant club hits. She has now come out with her sixth album Loose featured on her own label Nelstar Music Inc, is a synth pop mixture of both versions. With synth pop songs emphasizing on obscure sounds, bass and drum, to pop ballads, she shows her variety on The Ride.

Since her 2012 release the latest glance we’ve had has been her collaboration with Blood Orange’s 2016 release Freetown Sound on “Hadron Collider” a haughty track yielding insight to her transition to tracks with a heavier influence of electronic and pop beats. Her collaboration with St. Vincent producer John Congleton is evident of this transition from the beginning with “Cold Hard Truth” “we were meant to be alone” with heavy beats reminiscent to those in “cheerleader”. The first three track show the variety of the album and that is more of an upbeat personal expose than an album intended to have Saturday night jams, no matter how much we wished it would be like this. “Flatline,” the second song on this album is the more indie/electronic influenced track on speaking about her emotional numbness, a message contrasting with a very upbeat and dancey beat. Escalating the message by ending abruptly, and transitioning into the ballad that is “Carnival Games”. The third track speaking about the numbness and distance that comes with playing love games that seem fun and harmless at first but leave both parties feeling sour. The psychedelic influence, her soprano vocals and drums beats near the closing of the song revealing a depth that is not commonly accomplished in a ballad.

Nelly Furtado showcases her vocal variety and its non genre specific fluidity, finding her way through dark tracks by threading her sultry drawn out vocals through “Paris Sun.” Incorporating her quick lyrics that leave you wondering how she was able to fit so many words in without taking a breath in tracks like “Live,” her artistry managing to encompass the bewilderment of placing what could be a toxic relationship in your life.

The Ride cycles through varying ways of conveying different ways relationships in her life went awry or their shortcomings. Her experiences through recent years enabling her to capture a maturity that sets this album apart from one released by a younger pop singers undergoing heartbreak for the first time. Epitomizing her maturing in “Pipe Dreams” a song with a heavy gospel influence featuring the organ, and her last track “Phoenix”, a track whose lyrics and are as cliche as a song about rising through the ashes could be. What makes this track salvageable is the sense that she really has reached a level of security with herself as a musician and a human.

When artist take a break for so long it is almost certain that their new release will be something unexpected, but following a hit like Loose – taking fully into account that her other two releases since then did not create nearly as great an impact – Nelly had big shoes to fill. Producing this album on her own label allowed this album to feel more like Nelly communicated a declaration of her true self. Timing played a big role in the depth of this album and its passage to her audience, as fans are now more open to artists changing their sound.