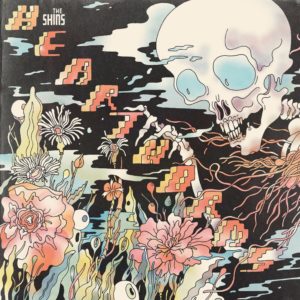 The Shins are the quintessential indie-rock band. The group is centered around the creative mind of James Mercer, who is accompanied by a new cast of instrumentalists for each record. Despite this revolving door of performers, The Shins have managed to establish a consistent and easily recognizable sound. They’ve been defining the genre since their 2001 release Oh Inverted World and are back from their five year hiatus to revitalize the genre with their latest release, Heartworms.

Heartworms is a solid release, even within The Shins’ impressive discography. In some ways it’s a return to form with simple singer-songwriter tracks harkening back to their earlier folk style records before they took on a larger, more grandiose pop sound. Winding country-inspired folk songs about Mercer’s background are imagined over the album’s course, displayed through many filters. The throwback style is is just one of many incorporated in the album, with other tracks taking a more progressive approach – an easy example is the lush and dreamy song “Fantasy Island” which is soaked in synth and accompanied by Mercer’s very best Brandon Flowers impersonation.

Many of the songs feel more personal to Mercer, like the track “Mildenhall”. In this track, he describes his youth spent on an Air Force base in England. He talks about his initial foray into music, when a stranger in class handed him a tape with The Jesus and the Mary Chain on it. Some songs get a little deeper, like when Mercer describes his struggles with anxiety on the closing track, “The Fear”. He takes a darker perspective by discussing his feelings of insecurity, and his fear that the people he loves will leave him in the end. His personal revelations draw the audience closer to his music and add a unique sense of depth to the album.

The Shins records have always been catchy indie-rock. The band is known for iconic songs that get stuck in your head, such as “New Slang”, “Simple Song”, and “Australia”. Heartworms has plenty of catchy songs on it, especially “Name For You” and the title track. The idea Mercer attempts to employ is to infuse those same infectious tunes with an emotional edge and for the most part it works.

The 1975 – Being Funny In A Foreign Language