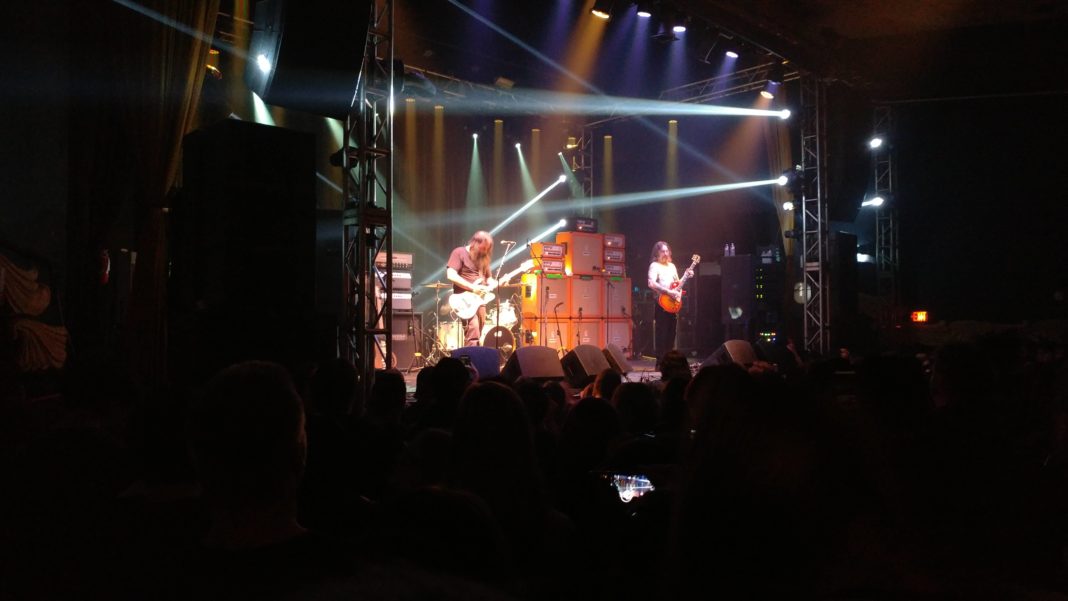 “Is this the merch line?” After moving through a packed line of fans ready to catch the sold out Sleep show, the atmosphere wasn’t much different inside as there was another enormous line ready to purchase various merchandise. Anxiety built as people stayed behind in anticipation for the headliner, all the while the opener took to the stage.

It was fairly obvious what would lie ahead in Pinkish Black’s set. With a synthesizer and drum kit on stage, they laid out a rather sinister sound for their music which generated a solid amount of energy out of the room for the Fort Worth band. As the set moved on, the music seemed to morph together many influences while staying very true to their Doom Metal base, and their instrumentation never came off as sloppy throughout any of the set. After a sizeable applause, Pinkish Black exited, and everyone awaited patiently for Sleep to come and take over.

After a decent amount of memes were spammed on the Granada twitter feed on screen, and even a few numbers got posted on there, Sleep started playing a radio transmission from the moon landing. This provided a nice background as everyone got a little more hyped up for the eventual start of the set. Once the screens rolled up and Sleep came out to play, one could tell that the smell of a few joints turned into the smell of a lot of joints. Sleep started off their set strong with a couple of songs from Sleep’s Holy Mountain, showcasing their raw power and lengthy style. The lower frequencies (most of what Sleep dishes out) sounded decently muddy in Granada, but the quality was definitely serviceable as most of the crowd found themselves head-banging throughout the set.

Just the beginning of Dopesmoker was enough to have the crowd erupt in cheers. The haze of marijuana thickened as Sleep started building up the track. It’s usually tough for a band to have a better live performance than their studio work, but Sleep definitely delivered as their set had blended some of the best sounds that their albums had to offer with power that shook the whole venue. Between each song brought a wave of cheers as bassist/vocalist Al Cisneros calmly thanked the crowd.

After the physically exhausting set, my ears were ringing with that familiar screech of a very loud performance. While Sleep at Granada wasn’t so loud that rocking without earbuds was unbearable, one should probably protect their ears if they wanted to hear their professor in their 8 AM class the next day.