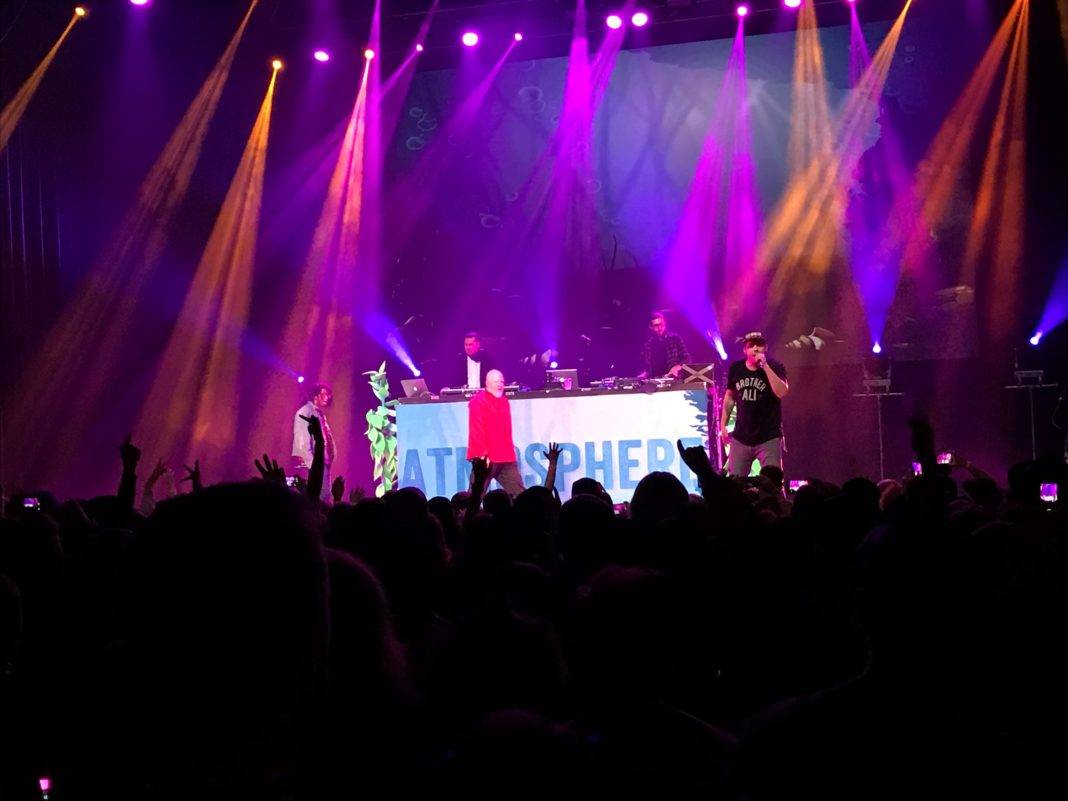 I’ve always heard of The Bomb Factory but this was my first time actually going, so when I turned the corner and saw a giant warehouse, I was kind of taken by surprise. It was much different than the normal hole in the wall venues I normally venture to in Deep Ellum. Walking in the first thing I noticed was the large crowd already assembled right in front of the stage with more groups of people socializing around the tables and couches they place around the perimeter of the high roofed warehouse where the stage is. But what really amazed me was the energy that already filled the venue even though only the first of two openers, Dem Atlas, was playing. This was my first time hearing Dem Atlas but his upbeat style of rap really matched Atmosphere’s similar style. He was already playing when I arrived so I only heard a handful of songs from him before he finished with one of his hits “Watabout” and made way for the resident DJ to take over for about a half hour before the next opener. When Brother Ali came on stage it seemed to spark the crowd up again and people could be seen dancing and reciting the lines all over the floor. He had a strong message of social change and heavily criticized the U.S. government along with racial equality. His singing was pretty solid but I couldn’t help but feel like he sacrificed the quality of his writing by trying to send a message with every song. Plus between songs he’d sometimes go on 5-10 minute rants about this or that. Personally, I don’t want to hear somebody preach about social injustices and politics at a rap concert. Don’t get me wrong, I agree with a lot of what he said. But that being said I don’t really want to hear about it when I’m  at a concert trying to have a good time listening to the music and relaxing.

Around 9:50 Atmosphere walked on stage with the mic and stood front and center looking at the audience motionless. Then he simply raised his hand and told everybody to smile and have a good time, all the while doing that himself for his 20th year playing in Dallas. He started off strong with a classic “God Loves Ugly” – one of my personal favorites as well. For the first 30-45 minutes of his show he mostly played music off his new album Fishing Blues which I quite enjoyed. But for the majority of his show he played a lot of his old classics and chatted up the audience often free styling between songs. I’ve been a huge Atmosphere fan since I was in junior high so I loved this. Furthermore, the audience obviously agreed because they blew up then entire set all the way from when he first walked out before 10 until he finished around midnight. Everywhere you went people could be hear rehearsing every song by heart and grooving to the beat. Never have a been to a concert where the performer looks like he is having as much fun as the audience especially when he brought Brother Ali and Dem Atlas on stage to freestyle with him towards the end of his set. All in All it was a fantastic show and next time I hear about Atmosphere coming to town I will go out of my way to be there.