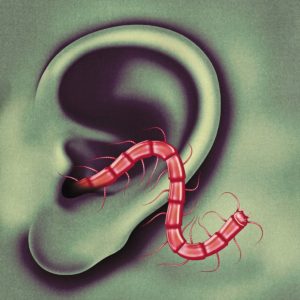 Thee Oh Sees returns with a psychedelic earworm on their eighteenth album, An Odd Entrances‘, released just six months after the frenetically brash, A Weird Exits. The mellower atmosphere fits in with the backwards juxtapositions of the album names, also seen in the track titles (See “Unwrap the Fiend, Pt. 1” from An Odd Entrances and “Unwrap the Fiend, Pt. 2” from A Weird Exits). This album is noticeably shorter, with a run time of just under thirty minutes, but the music itself takes you through a warped sonar journey that passes through calm, saccharine guitar lines in “The Poem” to a mess of synths in “Jammed Exit.” Thee Oh Sees’ eclectic influences are apparent in this record that could be shelved alongside a Can album.

An Odd Entrances plays like a long, convoluted piece resembling Syd-Barrett era Floyd. “The Poem” could be off a Caravan album, with its repetitive guitar lines and John Dwyer’s sweet, flat vocals singing flowing lines with internal rhyme: “the yellow dress was unimpressed.” “The Poem” is probably the closest Thee Oh Sees gets to a conventional song within this album and the switch to strange chaos comes abruptly with “Jammed Exit,” a six minute spacey jam with flutes and synths that seem to flow between your ears. This interesting composition would be at home as background music to an avant-garde French film but not an easy-listening playlist.  It’s the least accessible track of the album but when viewing the album as a whole, fits the eccentric and experimental theme.

The next track “At the End, On the Stairs” could be described as snazzy elevator music with soft vocals that bides its time before my personal favorite, “Unwrap the Fiend, Pt. 1” unveils itself. The riffs on this piece are infectious and heavy, slightly reminiscent of those from their hit “Toe Cutter – Thumb Buster” (Floating Coffin, 2013). “Nervous Tech” hypnotically builds upon a chord for eight minutes and slowly draws the album to a close, leaving the listener hungry for more.

An Odd Entrances blends all territory from 60’s psychedelic rock to heavier sludge influences and brings it all together in this refreshing combination.