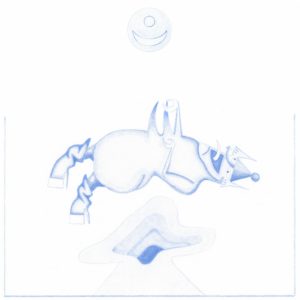 Devandra Banhart dropped his track “Middle Names” earlier this year after 2 years of inactivity, to the indie world’s delight. His previous album Mala (2013), was well-received for its rosy Banhart-beauty, and the track interested his listeners with its slight departure from the favored album’s sound. Banhart’s newest, Ape in Pink Marble is a successful return to his brand.

The 44-minute album exemplifies Banhart’s clever lyricism in a more darker, romantic tint compared to his previous works. Ape in Pink Marble resonates in folky nostalgia with quirky instrumentation that Banhart is known for. Banhart’s lyricism shines on this album, he addresses themes relating tragedy and comedy. The Latin American influence that Banhart often brings in his music is more prevalent, filled with calm, finger-picking acoustic as well as the bolero-kind of romanticism that makes us swoon. The melodies are interesting and catchy, tying together the recipe for a Banhart’s signature.

Banhart definitely takes a trip to the past, specifically to the 1960’s and 1970’s sound, elements of which are present in tracks like “Linda,” “Mara,” and “Fig in Leather.” Banhart seems to have fallen in love with groovy bass lines, exemplified by more low-end tracks than his previous. Banhart brings a throwback to the 1960’s folk renaissance with tracks like “Mara,” using twangy rhythm guitar, steady bass, and subdued instrumentation. Songs like “Fancy Man” bring back Devandra’s playful sound, a staple in his previous album Mala, with bouncy rhythm bass and an entertaining vocal melody. “Fig in Leather” has that typical pentatonic 1970’s violin, bass groove, falsetto chorus, and a Monster Mash-esque spoken bridge. Banhart cheekily refers to Eagles’ “Hotel California” in his track “Souvenirs” and goes on with a amorously sweet melody and harmony. Banhart also refers to his Latin roots with tracks like “Theme for a Taiwanese Woman in Lime Green,” a tip of the hat to Brazillian Bossa Nova, swaying the audience into a vintage South American atmosphere.

Ape in Pink Marble‘s release is perfectly suited as autumn is kicking in. Banhart’s latest has a rightful place in his discography, and will be listened to for years to come.