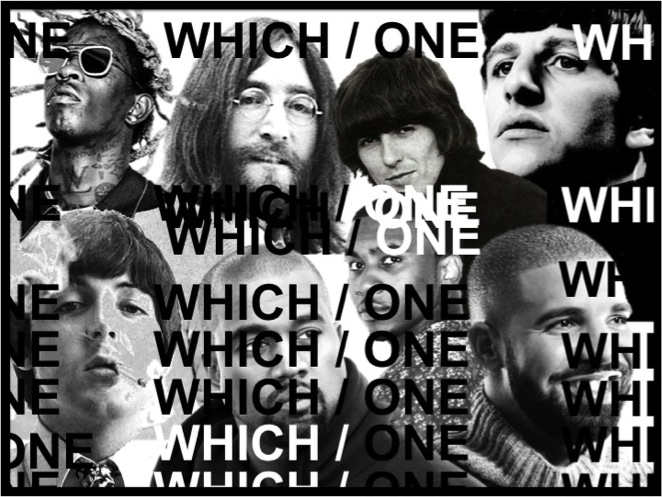 A couple years back, a substantial number of adults took to Twitter, the world’s most important website, to answer a question of grave importance: which group is better, rock-and-roll legends and typical front runners for greatest band of all time The Beatles or Atlanta-based rap trio Migos?

Here’s the thing though: Sure, Migos may have not made “Eleanor Rigby,” but they did make “One Time,” and that definitely counts for something. See, hip-hop has taken over rock, pop and practically any other type of music as the go-to art form for young people to express themselves. So when people say Migos are better than The Beatles, they’re not performing sacrilege. They’re literally comparing the closest thing they have to The Beatles to the actual group.

And that got me thinking: If The Beatles were around today, who would they be? Immediately, I concluded they would have to be rappers, because that’s how my brain works. And that’s when I spent about three days deep in thought and meditation thinking which rappers would fit best. Would Andre 3000 be a good Beatle? Would Jay-Z work better as John Lennon or Ringo Starr? (The answer is both.) WHO WOULD GUCCI MANE BE??? But then, like Thomas Edison turning on the first light bulb, I had my eureka moment. I formed the list based on quality of music, personality and general receptions for both rappers and members of The Beatles. The only real rule here is that any musical comparison between rappers and The Beatles has to stick to music made while The Beatles were still a group.

This may not be a comfortable topic to approach, but it’s one we all need to speak on with courage if we’re going to be better people and better Americans. Because the question must finally be resolved: If The Beatles were rappers, which rappers would they be?

Close your eyes. Are they closed? If you’re reading this, it’s too late and they’re not closed. For real, close them. OK, now I want you to tell me who first comes to mind when I describe this person to you: An egotistical maniac with a penchant to alienate everyone around him, stir up controversy, compare themselves to religious figures and create music that is either loved or met with borderline hatred depending on who you ask.

When Kanye released Yeezus back in 2013, everyone was up in arms when they heard “I Am a God.” Pastors around the planet condemned the “Jesus Walks” rapper for being blasphemous and sinful, which would be interesting if it hadn’t been a total rehash of the practically same controversy John Lennon created in 1966 when he said The Beatles were bigger than Jesus.

Only artists with egos the caliber of Lennon and West can get away with comparing themselves to messiahs and that’s mostly because their music is so good people totally look past the fact they’re basically sociopaths.

Lennon wrote some of The Beatles most groundbreaking and beloved songs, but also used songs like “Revolution” to take a stand against the injustices of the world, much like Kanye, whose work on songs like “Black Skinhead” cemented him as one of our generation’s most outspoken critics of white oppression.

The two also loved epic songwriting that reshaped music: Lennon is the driving force behind “A Day in the Life,” which some critics consider the greatest song of all time, while Kanye reshaped hip-hop in his image with “Lost in the World,” the celestial closing track of My Beautiful, Dart, Twisted Fantasy. This is the closest hip-hop has come to the classic Beatles magnum opus.

Finally, Lennon is defined, for better or worse, by his relationship with Yoko Ono, the mysterious, perplexing woman whom he loved and many others hated. She caused controversy, helped start scandal and stands as a cultural icon in her own right. If only Kanye had an equivalent lover…. THIS. IS. A. GOD. DREAM.

Paul McCartney is, without question, the sappiest Beatle. Most of his songs deal with broken hearts, longing for love or trying to woo as many women as humanly possible. At times it’s kind of pathetic, but it’s always endearing.

Aubrey Graham, better known professionally as “Drake,” is, without question, the sappiest rapper. His songs center almost exclusively on broken hearts or occasionally trying to stunt, mostly to get back at a woman who scorned him. It’s nearly always pathetic, but at times it’s kind of endearing.

The only logical conclusion that can be made from this is that if Paul McCartney were a rapper, he would be Drake.

Think about it like this: “Yesterday,” McCartney’s most successful hit and the most covered song in the history of modern music, is basically “Hotline Bling.” “Why she had to go, I don’t know/she wouldn’t say” is 1965’s version of “You used to call me on my cell phone.”
Then there’s “I Saw Her Standing There,” where McCartney pines about his desire to dance with an (underage) girl he sees at a party. Besides the possible statutory issues this brings up, this sounds a whole lot like “One Dance,” where Drake says basically the same thing.
Drake also flaunts his promiscuity frequently, which McCartney did more than any other Beatle on songs like “Back in the U.S.S.R.,” where he brags about sleeping with communists, to “Why Don’t We Do It in the Road?” which is as self-explanatory a song about sex can get. Drake, in turn, had a verse on “Pop That” by French Montana, which is also as self-explanatory a song about sex can get.

In conclusion, if Paul McCartney wrote a song about getting into a fight at a Cheesecake Factory with a woman, would you be surprised? Exactly. Paul McCartney is Drake. This, of course, logically, leads to the decision: Lil B is George Harrsion. Why, you ask? I’m glad you asked.

Fun fact: When The Beatles recorded “Norwegian Wood” for their 1965 album “Rubber Soul,” guitarist George Harrison played the sitar, an instrument typically reserved for classical Indian music. It was the first time a Western pop star used the instrument and it proved to be a revolutionary moment. It helped to start off the psychedelic rock movement and pushed the boundaries of what “conventional” music included.

Another fun fact: In 2011, Oakland rapper Lil B made a song about Caillou, the cartoon character on PBS, where nearly every verse ends with Caillou’s name. Currently, the song has over 4 million hits on YouTube.

This may seem odd to point out, but it really isn’t. Like Harrison, Lil B is groundbreaking and different, but not often lauded in the same way his peers are. Think about it: How many people say George Harrison is their favorite Beatle? Very few. But his influence on the group, specifically his inclusion of Indian and folk music into the groups sound, helped to make The Beatles the legendary group they are treated as today.

In the same vain, Lil B helped spearheaded the Myspace rap movement that opened the door for internet rappers who produced song after song to break into successful careers. Without him, there would be no Chief Keefs, Little Yacthys or even Futures. The truth is Lil B set the stage for all of them to be successful.

Harrison and Lil B’s content is also shockingly similar. Lil B, who also goes by the moniker of Based God, spreads love on songs like “We Are the World” and has a vaguely religious feel to his music. This is in line with Harrison, who wrote songs like “Here Comes the Sun,” which may be the closest thing The Beatles made to a Lil B song.

Don’t believe me? Let’s examine the lyrics a little more closely, just with a hint of Lil B’s spice:
Here comes the sun (SWAG)
Do-do-do-do (WHOOP)
Here comes the sun (SWAG SWAG)
And I say (OH MY GOD BASED GOD, THANK YOU BASED GOD!) It’s alright
It only makes sense that George Harrison is Lil B.
((Note: This was, by far, the hardest choice on this list to make. It was a toss-up between Lil B, Andre 3000 (too influential and loved), and Jay Electronica (not influential enough, but also spiritual. You know he went to Nepal once?) But hard-hitting journalism requires making tough decisions, you know what I’m saying?))

Ringo Starr is often derided as the worst Beatle. He’s just a guy who got into the world’s greatest rock band by accident and who, once in, often acted in comedic relief. His drumming, critics will say, isn’t even that good. If anything, he was a detriment to the group.

But what if I told you all of that was wrong? What if I told you that Starr, while odd and sometime whimsical, played a key role in helping to form The Beatles sound?
Now think about what rappers fit into the Ringo Starr mold: zany, weird, marches to the beat of their own drum, is hated by a vast majority of people and is a low-key standard bearer for their generation. The answer is simple: Young Thug.

The reverse comparisons can also be said of Ringo. If a picture of Ringo wearing a dress as a fashion statement ever popped up, no one would be surprised. They’d just shrug and go about their day, comfortable in knowing that only Ringo can ever truly understand Ringo. (Plus, spelling Starr with two r’s is the most Young Thug thing anyone can do.)
Ringo Starr and Young Thug aren’t bad. They’re just misunderstood. And it turns out they’re also essentially the same person.

But hopefully this incredibly well thought out article got you thinking about what really matters in life, like hypothetical comparisons between a group of four white British dudes and the best rappers of our generation. These are the mysteries we have to solve.