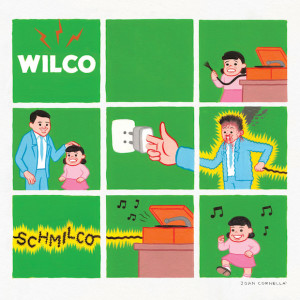 Joan Cornellà, a black humor comic artist, designed the album cover of Wilco’s Schmilco and that couldn’t have been a better way to set the mood for the Chicago-based outfit’s tenth studio album. Schmilco is Wilco in their middle age: uncomfortable, confused about the complexities of life, hilarious and kind of grumpy. By merely looking at the cover, you know exactly what you’re in for – roughly 35 minutes of feeling mildly lost and distressed.

The album opens with “Normal American Kids,” serving as an ode to the struggle of early adulthood and what it means to be normal. Certainly we can all relate to vocalist Jeff Tweedy’s twangy voice as he sings about how he hates those “normal American kids.” The album progresses to become more cynical and, for a moment, we lose ourselves in the alternative/folk/country atmosphere Wilco brings and has brought for the past 22 years.

Admittedly, Schmilco is a little bland and comes with some easily skippable tracks (“Common Sense,” “Someone to Lose,” “Shrug and Destroy”). As someone who is already very tired all the time, an album about being tired can be, well, tiring. However, this doesn’t automatically disqualify the album. Wilco’s acoustic sounds are familiar and comforting, despite the cynically and depressing nature of the lyrics. It comes off as quirky and relatable.

“If I Ever Was a Child” and “Locator,” both singles, were the main stand out tracks. Both catchy and bitingly snarky, Wilco exemplifies themselves. The tracks in between were generally forgettable, with the exception of “Cry All Day”; with lyrics like “I cry, cry, cry/cry all day/cry all night,” simplicity and a sense of self report come to mind, going back on the album’s sense of relatability.

Joan Cornellà really does set the tone for Schmilco; it’s an album capturing Wilco’s graceful aging and signature sound with tongue-in-cheek, ironic lyrics. It doesn’t sound like Yankee Hotel Foxtrot, the 2002 album that put them on the trajectory toward indie rock fame, nor does it sound like last year’s Star Wars, but it’s certainly Wilco. The album ends with “Just say Goodbye.” Goodbye Wilco, we’ll see you again.