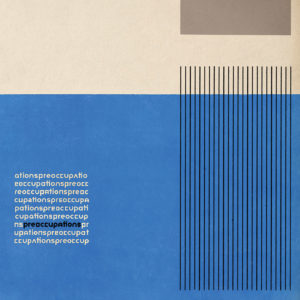 Preoccupations’ self-titled record is an interesting novelty. They are the only band to ever have two self-titled debuts. The artist formerly known as Viet Cong, rebranded themselves due to critics of political correctness and self-realization. We may never know which came first, but the name-change was a surprise nevertheless.

To remain in touch with their fan base, the band is still being billed as “FKA Viet Cong,” which defeats the purpose of the name change. Preoccupations, with all the PR distractions, manage to focus on fine-tuning the sound they introduced as Viet Cong. The sound is unique to the band and is distinct from their days as Women.

The first single, “Anxiety,” is a haunting reintroduction from their absence. Anxiety has been a consistent topic of interest of the band since their debut. On the track “Continental Shift,” Matthew Flegel sings, “check your anxiety, no need to suffer silently,” suggesting a bigger picture to the people who relate. They two songs differ in sound and emotion. Flegel’s voice is clear on “Preoccupations,” it cuts right through the swampy electronic and post-punk surface. His lapidary enunciations of an anxiety attack pairs unusually well with the upbeat synth.

The track list reads like the stages of a nervous breakdown. Anxiety is often followed by a monotonous hangover, that may or may not lead you to look up your “Zodiac” at three in the morning to see what’s next. Flegel’s shaman-esque, aggressive inflections on the track complements the instrumental appropriately. Wolf Parade’s Dan Boeckner’s vocals on “Memory” is a pleasant feature to the meditative track that bridges the first and second acts.

On the closing number, Flegel sings “you’re not scared, you’re not scared, carry your fever away from me.” The enumeration ends on a mostly electronic instrumental that is reminiscent of early Deerhunter. Preoccupations ends on a brighter note than expected; there seem to be missing pieces that could serve as an EP in the spring.

Preoccupations enshrine their sound in their sophomore effort. It’s easily one of the best post-punk albums of the year along with Savages’ Adore Life. Although it may be forgotten due to the overwhelming and impressive quantity of great albums that came out this year, it is worth noting and listening to. Please make an earnest effort to refer to them as Preoccupations, and correct your friends that say “oh, you mean Viet Cong?”