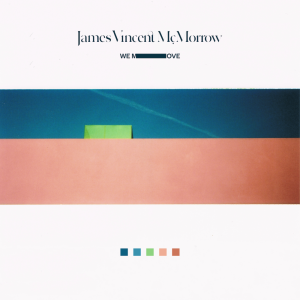 Upon hearing that James Vincent McMorrow has a new album, one would typically expect staple McMorrow vibes: folk, falsetto, filaments, force. Bouncing off his sophomore album Post Tropical, listeners would question if the new tunes would reflect this previous work, saturated with orchestral movements and passionate builds. On the other hand, maybe his new sounds could reach back into 2010’s Early In The Morning, reigning dark harmonies and charismatic acoustics. He is also known for dipping his toes into varying waters, working alongside producers with connections to Drake, Minaj, Rihanna, etc. It’s an exciting puzzle to wonder what he has in store, riddled with the potential of a completely different sound. His 3rd album We Move showcases what has been brewing in McMorrow’s musical mind.

We Move pleasantly vibes a relaxed atmosphere, an ether that McMorrow embodies well in his music. Throughout the album, listeners work out their emotions through reflective means, rather than explosive brash decisions. The air is not stagnant, however. The songs showcase charming syncopated accompaniments, an important aspect that Post Tropical lacked in. Listeners can appreciate the sound while stirring in a coffee shop, walking alone to an obligation, staring at a wall, etc. A mix of interesting mediums (essential falsetto harmonies, subtle trap beats, complimenting bass executions, catchy rhythmic melodies) aid this meditative travelling wind. The active trimmings littering the album keep the audience’s attention, refusing to stay immobile. After all, the album is titled We Move.

McMorrow’s lyrics echo a familiar kind of verse. It’s almost as if his words reflect the listeners’ internal dialogue. How do people talk to themselves awake at night? Check out “I Lie Awake Every Night:” “Ask me too many questions / Ask me too many questions I can’t stand.” It even sounds like McMorrow could be singing about the listener’s life, such as in “Get Low:” “We’re digging in the dirt, it gets old / Then you’re left with no one.”  The album’s poetry compliments the sound, speaking words and emotions that the listeners could never could say out loud.

One of the largest features of this new work would be the R&B, soulful impressions. One would expect McMorrow to explore this branch in his previous works due to his fitting voice. Remixes of his previous singles have already been drawn in this genre. Maybe it was a matter of time until his style would finally touch base. With heavy bass resonating beside gospel accords and charismatic rhythms, We Move sounds like home. Draped with little 80s synths and beat licks, listeners can’t help but nod in McMorrow’s stylistic choices.

We Move is a wonderful addition to the growing discography. The album still exemplifies primary McMorrow facets and moods while exploring a new, but homely territory. It’s a bit surprising how well the sounds of this album complement each other in a way to create this hearty united force. How perfect the timing is, released at the very start of autumn. We Move mellows out summer situations, breathes in cooler breezes, and welcomes darker light.