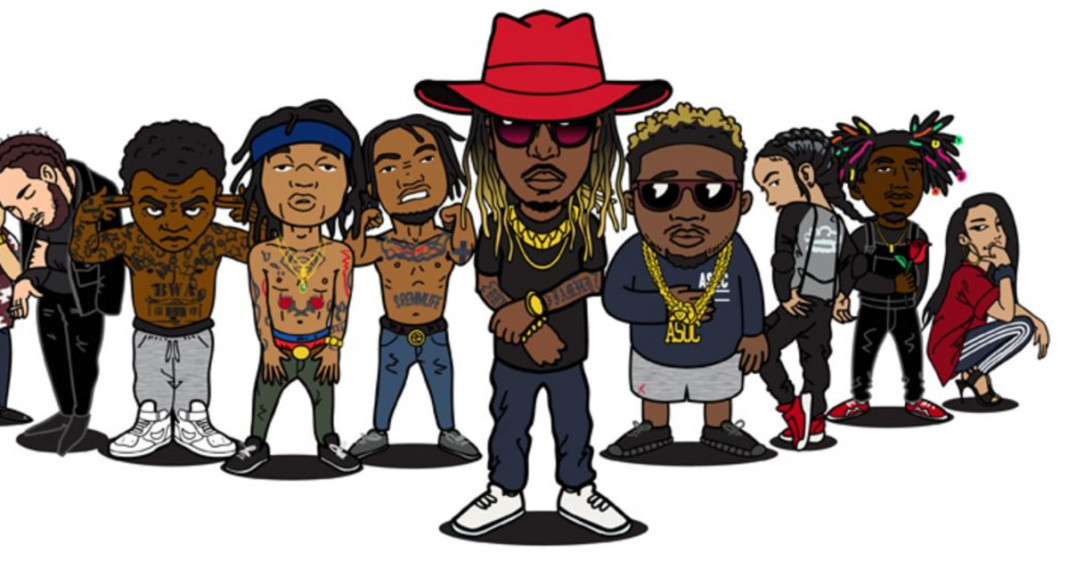 The grand euphoria that one can experience from JMBLYA, an annual EDM/trap/hip-hop festival that’s held in Dallas and New Braunfels/Austin, is undeniably too good to pass up. The 4th ever JMBLYA had some nice additional amenities to add: a water slide alongside breezy cooling stations to combat the heat, cut outs of the musical arts to update the gram and security giving out water during some musical acts. Last year’s headliners included PARTYNEXTDOOR, G-Easy and Kaytranada. Here’s who JMBLYA Dallas went absolutely crazy to this year: The duo Trill Sammy & Dice Soho kicked off JMBLYA off to a rowdy start. By the time doors opened, a good amount of people showed up eagerly anticipating for what JMBLYA had in store. Even though they were the opening act, they gave it their all and gave a performance that was similar to artists being in the spotlight for years on end. Dice jumped into the crowd, too, at one point to which everyone ran towards his direction. Collectively, everyone started to lose their minds when hits such as “Just Watch” played. And indeed, everyone had every right to erupt with Sammy & Soho starting things right.

Jazz Cartier hails from Toronto and JMBLYA was his first ever stop in Texas. Cartier felt welcomed by the Southern hospitality, and exchanged his affection by getting the crowd to turn up. Cartier constantly asked for participation from the crowd that ranged from inclusion of singing certain words or phrases to his tracks, or even just asking the general well being of his peers. Cartier’s energy was vocally and physically intense, as he would hop closer to the crowd every chance he got. He felt the love from Dallas, and proclaimed that he’d for sure be back.

Keith Ape, a South Korean-based rapper, gave what seemed to be a lackluster performance. Keith Ape’s trapesque hip-hop garners more recent influences from the South of the U.S with his production always teetering on the edge of pure explosion. He’s gathered an interesting cult following, and so many people here were stoked to see how he would do. Ape had an awkward start trying to capture the audience’s attention as the bass just seemed to overpower him spitting his verses. Ape’s breakout hit, “It G Ma”, was a definite highlight of his set as Ape’s presence heightened with the everyone going berserk. Overall, Ape had some good moments but needed to polish up his execution.

Kehlani dedicated a lot of her songs for the ladies of JMBLYA. It was all for good intent, too, as she even pointed out how male dominated the music industry is. She was the only female on the bill outside of Noodles who helped support Kehlani’s exquisite stage presence. A lot of things ran smoothly with her set: She was in sync with her bank up dancers, her singing was crystal clear and she graced the stage with her down to earth personality. And indeed, the females in the audience were rooting for her in terms of screams of endearment, while the males seemed dazed and starstruck to who Kehlani was. Everyone, though, seemed exceedingly satisfied with what they just experienced.

Kevin Gates went in. It’s as simple as that, but the Louisiana-based rapper was all hype. Gates’s flow was steady with the audience not that far from rapping alongside side with him. It was all a rage fest as Gates mixed in his debut album, Islah, which was released this year with tracks from his earlier mixtapes. Hit singles from Islah like “2 Phones” and “Really Really” were all naturally curated to kick start the party, and nonetheless Gates engaged with the crowd as often as he could. Gates was a good start and a suggestively strong catalyst for what was to come next with the energy multiplying tenfold.

Carnage, in a nutshell, created waves of uproars with his robust and filthy trap tunes. In a flash, the DJ set intermission was a calm before the storm as Carnage laid down bass heavy dubstep cuts from Skillrex with his own signature tracks like the wonderful “Kat!e” from none other Kat!e Got Bandz. The pushing, the moshpits, the fist pumping were all cranked up to maximum level, to which elevated beyond that when Carnage did some insane bass drops. It was an all trap set, which reaped in all the rewards and was consistently straight fire. Carnage even tweeted how satisfied he was with his set. With past showings at big festivals in Dallas such as Lights All Night or intimate venues like Rio Room, Carnage will always be welcomed in the 214. Post Malone helped levy the cruical tension everyone endured during Carnage’s heavy set. Post Malone, who was raised in Grapevine, TX (holla), set the stage with his insanely catchy, woozy production with hits such as “White Iverson” and “Too Young”. The entire audience were having the time of their lives singing, and Malone mirrored the sentiment as he was all smiles. Who can blame him? His first sold out show ever was in Dallas, and Dallas returned the love once again just only a year later. After the chaos that was Carnage, the feeling of unison was totally infectious. JMBLYA billed Post Malone as a special guest, but another name that could be associated would be a hometown MVP.

Rae Sremmurd was a perfect transition from Post Malone’s chiller set. The trap hip-hop duo reeled in the JMBLYA audience in every single way they could, outside of their undeniable catchy and fun songs. Rae Sremmurd encouraged all vices to be committed by wanting mosh pits, illicit drug use and for their female fans to show off their goods. The crowd was all push-and-pull, which proved that being a Rae Sremmurd fan was all an endurance test. The duo matched the crowd’s liveliness and more by soaring on every single spot on stage. Crowd favorites like “No Type” and “No Flex Zone” amped up everyone to groove, bounce and rage before the havoc of what was to come of Future.

Future invokes an immediate fangirl effect among the crowd but to the surprise of actual Future fans, most people did not know the lyrics to his solo songs; only the songs popularized by Drake. In fact, one attendee even said that all she really wanted was “for Future to sing all of Drake’s songs.” Future’s energy was present but not outstanding and certainly nothing elaborate. In comparison to A$ap Fergs performance in 2014, the value factor would go to A$ap. The crowd was incredibly aggressive with the bass cranked up to deliver the magic that Future does best. Prepare yourself by hitting the gym a week in advance if you plan on going to one of their future shows (no pun intended). All in all, Future rightfully excelled as headliner for JMBLYA 2016 given his raw yet smooth energy.